Warning: "continue" targeting switch is equivalent to "break". Did you mean to use "continue 2"? in /nfs/c06/h01/mnt/88637/domains/blog.irockcleveland.com/html/wp-includes/pomo/plural-forms.php on line 210
 I Rock Cleveland I Rock Cleveland | The Rockometer: Honeys by Pissed Jeans

The Rockometer: Honeys by Pissed Jeans 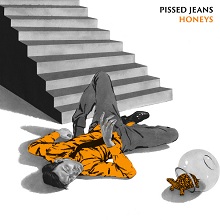 For the target audience — Male, thirty-something, office worker, and educated in classic punk, early Sub Pop and AmRep Records, Pissed Jeans’ Honeys will resonate like few other records released over the past five years. As Matt Korvette growls, about management, health insurance, dinner parties, online dating, and his own ability to function as an adult in an adult relationship, you’ll find yourself nodding, no, headbanging in agreement with every snarl and every scuzzy guitar riff.

The targets will have an entirely different take.

Somewhere in suburban Philadelphia there’s an HR employee examining Korvette’s permanent file. Middle management is concerned Korvette isn’t dedicated to his job as an insurance claims adjuster. Furthermore, as Sally from accounting just pointed out, there’s a song on his album, Honeys, where he wishes death not only upon his manager, but a broker, too. Does Matt know why this behavior can’t be tolerated in the office? The employee handbook, which he signed a document indicating he read and understood, clearly states how threats of violence against other employees will not be tolerated. A meeting is scheduled for 3 PM on Monday. It’s time Matt figures out for himself whether he wants to be a musician or a member of our company. A written warning will be presented. His future will be discussed. We will recommend Matt pursue those other opportunities.