Warning: "continue" targeting switch is equivalent to "break". Did you mean to use "continue 2"? in /nfs/c06/h01/mnt/88637/domains/blog.irockcleveland.com/html/wp-includes/pomo/plural-forms.php on line 210
 I Rock Cleveland I Rock Cleveland | The Rockometer: Push the Sky Away by Nick Cave and the Bad Seeds

The Rockometer: Push the Sky Away by Nick Cave and the Bad Seeds 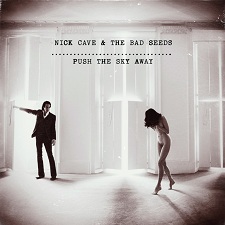 After two albums with the raucous Bad Seed alter ego, Grinderman, and one album with the Bad Seeds which shared much of the machismo of their other selves, Nick Cave has brought back the Bad Seeds proper for a suite of nine subdued ballads. Gone are the rabid howls of a man whose blood is boiling with a manly mix of Viagra and Winstrol. Gone is the shriek of the electric bouzouki. Gone is the man of depravity and his lone shot at redemption. Instead, there’s a song which name drops Wikipedia.

If it’s any consolation, “We Real Cool,” also known as the Wikipedia song for this discussion, is not solely about the web’s most popular, sometimes reliable encyclopedia. Wikipedia only comes into play when Cave is citing the distance from Earth to Sirius and Earth to Arcturas. And, maybe it helped fill in some details during, “Higgs Boson Blues,” wherein Cave imagines a scenario where the Large Hadron Collider’s experiments with the Higgs Boson particle bring on the apocalypse. With the world now shit, and Cave on his way to Geneva, Hanny Montana, Robert Johnson, and Lucifer all make appearances.

Plus, Cave is still a rarely equaled, uncompromising songwriting talent with the ability to freeze the listener in place. His description of the Brighton sea-side in “Water’s Edge” twists an innocent, youthful escape into a sinister place. Bass notes bubble like a gathering storm. Strings sing gypsy melodies. His lines hit hard: “With a bible of tricks they do with their legs/The girls reach for the speech and the speech to be heard/To be hard, the local boys teem down the mound/And seize the girls from the capitol.” A fun time will not be had by all.

In a similar manner, the whimsically named, “Jubilee Street,” is the stage for a scene of Russian mobsters, prostitution, and intrigue.

While songs about cretins, miscreants and criminals may be some of Cave’s most memorable, he can do love songs, too. “Wide Lovely Eyes,” makes a case to be considered one of his finest. Backed by little more than an electric Rhodes and a guitar which clicks like a rickety ceiling fan, Cave describes a woman whose beauty is so startling, her departure causes the entire city to shut down and riot: “Your dress sighs with your wide lovely strides/And all along the street lately the stories are bound/They’ve dismantled the fun fair and they’ve shut down the rides/They’ve hung the mermaids from the streetlights by their hair.”

All of this is to say, the impact of Push the Sky Away may vary from listener to listener. Some may not be satisfied with lyrical intensity, alone. Others, unfamiliar with Nick Cave’s ways, may not appreciate the intentional irony of a songwriter of his stature using the word, “Wikipdeia,” in song. Long time fans, however, will have far less to bicker about. After all, what is uncompromising but another way to say Nick Cave being Nick Cave?