Warning: "continue" targeting switch is equivalent to "break". Did you mean to use "continue 2"? in /nfs/c06/h01/mnt/88637/domains/blog.irockcleveland.com/html/wp-includes/pomo/plural-forms.php on line 210
 I Rock Cleveland I Rock Cleveland | Play Me: “Elephant Man” by Pleasure Leftists 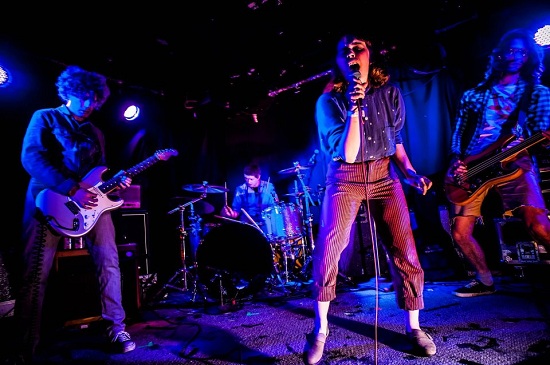 See that fella, over there on the right side of the photo with the cut-offs and flannel? That man is Steve Peffer. Aside from playing bass with the Cleveland post-punk band, Pleasure Leftists, he runs the record store Hausfrau Records in the Gordon Square neighborhood. We may not even be on a first name basis, but in the past few months he’s recommended some killer records for me to check out each time I step in the store. Thanks to Steve, my record collection has more Birds of Maya, more Total Control and more Spacin’. I would thank him for California X, too, but his recommendation came after I had already mail-ordered that one.

You see, Peffer isn’t your stereotypical record store clerk, like the ones portrayed in High Fidelity. He noticed I had a weak spot for old Sub Pop records and began recommending others which had the same vibe. I’m sure funk, soul, and noise aficionados have had a similar experience at his store.

The point is, because the bassist of Pleasure Leftists works in a record store, it doesn’t mean the band of the record store owner is going to sound anything like Sonic Death Monkey. Are there krautrock influences?  Sure, but even as “Elephant Man,” moves in dark, Joy Division-like circles to a motorik rhythm section, Haley Morris’ voice, more new wave pop star, then doom and gloomer, beckons the listener to take this band seriously.