Warning: "continue" targeting switch is equivalent to "break". Did you mean to use "continue 2"? in /nfs/c06/h01/mnt/88637/domains/blog.irockcleveland.com/html/wp-includes/pomo/plural-forms.php on line 210
 I Rock Cleveland I Rock Cleveland | The Rockometer: Chelsea Light Moving 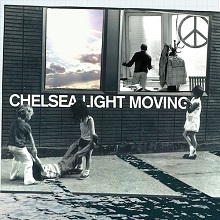 In the standard Hollywood version of a breakup, man gets a divorce, man loses things, and man replaces those things with a red Mustang. Man is now vibrant and young, again. Man is free to chase other shiny, young things.

The story of Thurston Moore’s separation from Kim Gordon and the subsequent dissolution of Sonic Youth follows a similar path, except that red Mustang is a light truck and that light track carried the name of a moving company operated by composer Phillip Glass, Chelsea Light Moving, and that truck and that company would become the name of Thurston Moore’s new band. It’s this new band, with Keith Wood on guitar, Samara Lubelski on bass, and John Moloney on drums, which enables Moore to turn back the clock to the late ’80s, early ’90s period of alternative rock and record a smashing album in the vein of Sonic Youth classics like Dirty and Goo. Let’s call it the IFC version.

For, when was the last time Moore consistently ripped like this?

Look, I don’t wish unpleasant life events on anyone, especially my indie rock icons, but if that’s what was needed to get Thurston Moore to shake the doldrums and return to being a veritable rip factory of experimental guitar, then, so be it. Get on board and enjoy the ride.