Warning: "continue" targeting switch is equivalent to "break". Did you mean to use "continue 2"? in /nfs/c06/h01/mnt/88637/domains/blog.irockcleveland.com/html/wp-includes/pomo/plural-forms.php on line 210
 I Rock Cleveland I Rock Cleveland | The Rockometer: Songs for Slim by The Replacements

The Rockometer: Songs for Slim by The Replacements 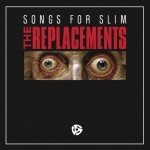 The Replacements
Songs for Slim
Self Released/New West Records

While fans have long clamored for a reunion from the surviving members of the Replacements — Paul Westerberg on vox and guitar, Tommy Stinson on bass, Slim Dunlap on guiatr, and Chris Mars on drums (original guitarist Bob Stinson passed away in 1995), their dreams were consistently quashed by either general disinterest on the parts of Westerberg and Mars, or the dreaded, previous commitments. Stinson, most famously, has been Guns ‘N’ Roses bassist since 1998 and has filled a similar role for fellow Minneapolis rockers, Soul Asylum.

Lord knows, people tried to convince The ‘Mats out of retirement. Ever since Coachella has been a thing, there have been rumors of big festival money being offered to get the boys in the band back together. One would think any ill will and all scheduling conflicts would be eased by the promise of an attractive pay day.

Ultimately, it took something far greater than the allure of stacks of printed cash to revive this band. That something was friendship. In February, 2012, Slim Dunlap suffered a severe stroke, leaving him  in need of constant medical care. Later in the year, when Westerberg brought up the idea of a new Replacements record with Dunlap, his ailing friend would urge them to do it.

Westerberg and Stinson hit the studio. Westerberg would report, “Tommy and I strapped on guitars, not a word was said, and bang. We still rock like murder.”
And, Songs for Slim was born.

True to his words, Westerberg and Stinson do still have it. The Gordon Lightfoot cover, “I’m Not Sayin’,” finds Westerberg’s voice cracking and wavering on the saddest words, as he and Stinson trade rambling leads. On the Leon Payne track, “Lost Highway,” meanwhile, the two give this old number popularized by Hank Williams the hootenanny treatment. This one has the plug in, get it good enough, and rock it out feel of The ‘Mats earliest work. The pairs’ contributions are bookended by The Dunlap penned, “Busted Up,” and a wobbly, boozed up take on the show tune, “Everything’s Coming Up Roses.”

Have you noticed how all of the talk so far has been of Westerberg and Stinson? Although all three able members of The ‘Mats appear on the EP, Mars’ involvement is limited to one track, “Radio Hook Word Hit,” which he recorded solo. It’s a nagging, little detail, one that quashes the inherent romanticism of the rock reunion, and one which becomes even more troublesome once one considers the impetus for Songs for Slim in the first place.

Over $100,000 was raised for Dunlap’s care when 250 limited edition copies of this thing were first offered up on eBay. More singles by more of Slim’s friends are planned, and a standard, physical release of The Replacements EP is slated for April. From a charitable standpoint, the campaign has been a rousing success.

And maybe, just maybe, we’ll still get that real Replacements reunion, the romantic reunion of old mates in the studio and laughs on the road. For once those who have been waiting for years get their ears around Songs for Slim, they’ll demand more. Songs for Slim teases and is over too quickly to satisfy the true ‘Mats fan. The calls for a full length album will continue, as will the demands for a tour. Can Mars really say no for the hundredth time? It’s for a good cause.