Warning: "continue" targeting switch is equivalent to "break". Did you mean to use "continue 2"? in /nfs/c06/h01/mnt/88637/domains/blog.irockcleveland.com/html/wp-includes/pomo/plural-forms.php on line 210
 I Rock Cleveland I Rock Cleveland | The Rockometer: The Desserters by Rachel Zeffira 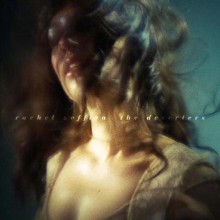 When one is capable of time stand still, take your breath away, and sweet Mother Mary moments, as classically trained opera singer, Rachel Zeffira, has shown herself capable of during her short, still-developing pop career, capable enough and pleasant enough become not nearly good enough.

Zeffira’s cover of My Bloody Valentine’s “To Here Knows When,” is her time stand still, take your breath away, sweet Mother Mary moment on her debut album, The Desserters. Here, her talents as a vocalist and arranger are vividly displayed as the wooziness of My Bloody Valentine’s intense guitar wash, is alternately mimicked by brass, woodwind, piano and voice within a gorgeously, understated arrangement. Listening, but once, is not an option. This songs demands to be repeated.

Throughout the remainder of the album, Zeffira approaches, but never quite reaches that same high. The title track, “The Desserters,” is as close as she gets. Again, the mix is delicate and nuanced, and her vocal range is similarly teased, evoking not the grandeur of the Vatican (where she has previously performed), but the loving mother’s lullaby of one’s youthful dreams.

Zeffira’s background and her ability make her a unique talent. Pop artists are often criticized in rock circles for doing nothing more than singing someone else’s songs. Zeffira sings. She writes songs. She composes her own arrangements. She even plays many of the classical instruments heard throughout The Desserters. The liner notes credit Zeffira on piano, synths, vibraphone, organ, oboe, English horn, violin, viola and as a conductor. No, Zeffira’s challenge is a different one: How can she best utilize her talents within the structures of the modern pop song? A suite of ten, subdued chamber pop songs is not enough. Her voice is too big; her talents are too varied to be framed in such an unassuming manner.