Warning: "continue" targeting switch is equivalent to "break". Did you mean to use "continue 2"? in /nfs/c06/h01/mnt/88637/domains/blog.irockcleveland.com/html/wp-includes/pomo/plural-forms.php on line 210
 I Rock Cleveland I Rock Cleveland | The Rockometer: Void by Destruction Unit

The Rockometer: Void by Destruction Unit 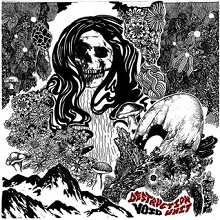 Upon hearing the first track from Destruction Unit’s Void LP, I wrote this: “(Destruction Unit) sound like they break things. That’s what they fuckin’ sound like. Electronics slamming against the sidewalk, baseball bats breaking glass, knee caps, brains, your mom’s fancy china, your sister’s heart — you name it and they’ll break it.”

Now that I’ve heard the rest of the LP, I’d like to walk back my initial statement: Destruction Unit sound like they break things, then they regret their rage and wish they really hadn’t smashed their smart phones in a fit of rage. Maybe cat videos and pictures of other people’s dinners aren’t the enemy. So, maybe instead of breaking things, they decide to smoke a lot of weed and order two twelve packs of Doritos Locos Tacos, in both original, Nacho Cheese, and new Cool Ranch flavored shells, and try to be a little less careless the next time in the studio.

How else does one explain their abrupt transformation from punk rock wrecking machine, guitars like cudgels and drums like aluminum rods, into one content to aimlessly drone about for seven-and-a-half minutes on a track named “Druglore?” There’s also the eight-and-a-half minute, “Smoke Dreams.” Think Spacemen 3 with less direction, more weed and more locos tacos.