Warning: "continue" targeting switch is equivalent to "break". Did you mean to use "continue 2"? in /nfs/c06/h01/mnt/88637/domains/blog.irockcleveland.com/html/wp-includes/pomo/plural-forms.php on line 210
 I Rock Cleveland I Rock Cleveland | Play Me: “Diane Young” and “Step” by Vampire Weekend

Play Me: “Diane Young” and “Step” by Vampire Weekend 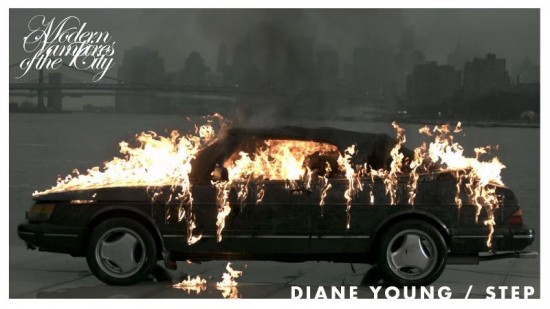 Lost amidst the chit-chat of the critic class, obscured by discussions of class in indie rock and cultural appropriation (this music of well-to-dos borrows for those who can’t afford to dry clean their oxfords!), is the fact that Vampire Weekend are a lot of fun. Turn your brain off for a minute, and maybe, you know, go out and actually see a band live, and you’ll witness first hand how Vampire Weekend inspires not just think pieces, but masses shaking their asses.

As a preview for their third studio album, “Diane Young,” certainly reinforces Vampire Weekend’s ass-shaking bona fides. It’s part Paul Simon and part auto-tune doo-wop with machine-fire snare hits and rockabilly guitar. It has a relentless tempo, an instant hook, and, just so you never forget where these youngsters have been, a reference to the Kennedys. Take that, Sir Snark-A-Lot.

“Step,” the b-side to “Diane Young,” and also from the forthcoming album Modern Vampires of the City (5.7 on XL Recordings), is the slighter of two tracks unveiled today. It’s combination of harpsichord and thick beats recalls the hip-hop opera exeriments of Malcolm McLaren, but here Vampire Weekend are not aiming for a grand statement, but a gentle come-down. Each instrument has its space. Each element knows its place in the mix, showcasing a second reason why Vampire Weekend cannot be dismissed so easily: This band genuinely understands how to construct a winning pop song.

Look for “Diane Young” and “Step” to show up digitally tomorrow at iTunes and the like. A limited edition 7″ with these two tracks will be released on April 7th. The album proper follows on May 7th.