Warning: "continue" targeting switch is equivalent to "break". Did you mean to use "continue 2"? in /nfs/c06/h01/mnt/88637/domains/blog.irockcleveland.com/html/wp-includes/pomo/plural-forms.php on line 210
 I Rock Cleveland I Rock Cleveland | The Rockometer: Comedown Machine by The Strokes

The Rockometer: Comedown Machine by The Strokes

4
The Rockometer Says... "This is Baloney" 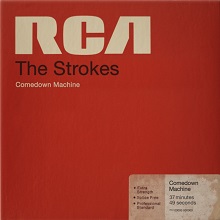 You know that moment when you’ve heard enough from a band whom you’ve been following for years? That moment when you decide, “You know what? I really never need to hear a new song by these guys. I’m satisfied with the back catalog.” That moment is Comedown Machine. That band is The Strokes.

Over the course of 40+ minutes, the stylish, New York garage rock quartet, do everything in their power not to be the stylish garage rock band they once were. And, the problem lies not in the desires of vocalist Julian Casablancas and guitarist Albert Hammond, Jr to experiment with different styles. It’s that they haven’t a clue who they’d rather be.

Prince: That’s The Strokes attempting to be sexy and funky on “Slow Animals.”

The “The” Bands of the early ’00s not named the Strokes: All of them, from The Hives and The Vines, to the band The Strokes used to be, could write a better hook than, “All the Time,” the flat, uninspired attempt at a classic Strokes song by the modern day Strokes.

None of these tracks exhibit any solid identity or display any tangible passion. If the band, themselves, can’t be bothered to care, you’ve gotta ask yourself, “Why should I?”