Warning: "continue" targeting switch is equivalent to "break". Did you mean to use "continue 2"? in /nfs/c06/h01/mnt/88637/domains/blog.irockcleveland.com/html/wp-includes/pomo/plural-forms.php on line 210
 I Rock Cleveland I Rock Cleveland | The Rockometer: Shaking the Habitual by The Knife

The Rockometer: Shaking the Habitual by The Knife 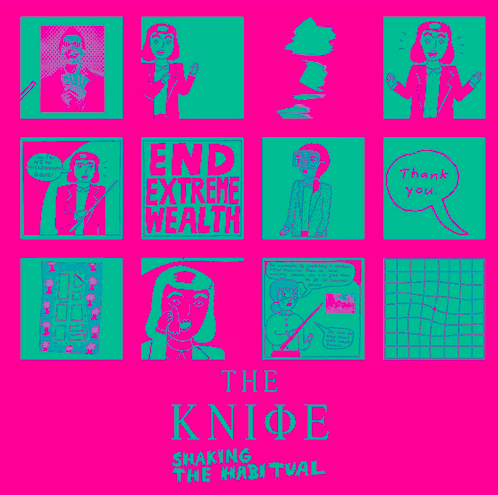 The Knife
Shaking the Habitual
Mute

Before there was EDM, our modern shorthand for electronic dance music, there was IDM, or intelligent dance music. IDM was ticky, glitchy and intentionally difficult strain of electronic music, and if you didn’t get it, chances are, you weren’t the type of person who was supposed to get it. IDM had a particular insularity about it.

IDM would have been sent to the word graveyard a long time ago if it hadn’t been for Radiohead and Kid A, their follow-up to the breakthrough album, OK Computer. Here, IDM kinda, almost made sense. Radiohead added a lot of Thom Yorke, a lot of rhythm, and a little melody, and those ticks and glitches, like all of your personal communications devices simultaneously on the fritz, became a powerful tool to describe our current techno-sociological state.

Although they would never admit so in an interview, The Knife would like to position Shaking the Habitual as the modern day Kid A. Over the course of the album’s 90 minutes, this secretive Swedish duo set heavy topics like capitalism, feminism, and energy consumption against an often aggressive, always provocative suite of pitched vocals, alien bleeps and roughshod beats.

At its best, as on “A Tooth for an Eye,” the music and message combine in thrilling ways, as a seemingly uncontrollable array of synthetic sounds coalesce around the irritated vocals of Karin Dreijer Andersson. In a lesser band, the words would have been secondary, but listen closer, and you hear lines like “We’ve been running ’round/Pushing the shopping cart/January twothousandtwelve/ Even in the suburbs of Rome/ A brick in a castle/A camp for those on the run/Dance as weapons.”

Later there’s an unlikely pop moment with, “A Cherry on Top,” a nearly nine-minute composition of unsettling drone and tender balladry. “Without You My Life Would be Boring,” meanwhile, unites a Sub-Saharan rhythm with a Middle-Eastern melody to captivating effect.

At this point the duo appear unstoppable, capable of anything, even ushering in a new era of politically conscious music.  The problem is, this is also the point where The Knife begin to believe in themselves a little too strongly. Are you familiar with the messiah complex? No? Then perhaps you’ve never heard “Old Dreams Waiting to be Realized,” a 19-minute drone on wealth,  or “Fracking Fluid Injection,” a nine-minute song which sounds as if it was played on a dented saxophone in an attempt to mimic the hapless cries of fowl drowning in oil.

Look, I’m against fracking, too. Ohio shouldn’t be having so many earthquakes and an insatiable lust for fossil fuels, corporate greed, and toothless regulation is to blame. Three minutes of dead birds would have been enough. Nine minutes is, quite literally, over kill.

Strangely, for a pair with strong opinions on corporations and capitalism, The Knife are surprisingly good at playing the game. By including these extra long numbers, a double LP on 180 gram vinyl became a triple LP, one which runs over 90 fracking minutes and one which will set you back close to $30 at most outlets. Do they not realize they are gouging their own customers with the old extra features of no redeeming value trick? Are they not aware of the contradiction? “End Extreme Wealth” is printed on the cover of the album.

Considering the fact their press releases come with instructions on how their songs and videos are to be interpreted, I’d wager to say, yes. The Knife are stubborn, detail-oriented types who think of everything.

Then again, maybe I skipped through the cartoon inserts too quickly. Perhaps they explained why The Knife chose to deliver a bloated record. Or, maybe I’m not meant to get it at all.