Warning: "continue" targeting switch is equivalent to "break". Did you mean to use "continue 2"? in /nfs/c06/h01/mnt/88637/domains/blog.irockcleveland.com/html/wp-includes/pomo/plural-forms.php on line 210
 I Rock Cleveland I Rock Cleveland | The Rockometer: Silence Yourself by Savages

The Rockometer: Silence Yourself by Savages 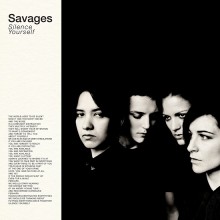 If there’s one reason I keep repeating the phrase “So fucking intense,” it’s not that I’m aiming to be Moutain Dew’s new internet pitchman, but because the dynamics throughout Silence Yourself are such even as the tom-heavy rhythms beat out by Fay Milton foretell heaviness on the horizon; the bass of Ayse Hassan moves with a prize-fighters finesse also hinting at the big hook; and the guitars of Gemma Thompson jab and jab during the verse, that hook, in this case a shriek from vocalist Jehnny Beth and a stomp and a screech from Thompson delivers the knockout every damn time.

Did you listen to that? These women from London have tapped into something so primal, Lord of the Flies primal, that they effectively neuter any arguments about their chosen milieu. So what if post-punk hasn’t been popular since the fifth anniversary of Interpol’s Turn On the Bright Lights and we just now celebrated the 10th anniversary of Turn on the Bright Lights, pay attention to how Beth belts out the opening lines of “She Will:” “She will enter the room/She will enter the bed/She will take like a friend/She will kiss like a man” and “She will forget her name/She will come back again/Get hooked on loving hard/Forcing the slut out” and then goes on repeating “She Will…She Will…She Will.” That’s conviction.

If those two jams don’t do it for you, try the unhinged rage of “Hit Me,” where every guitar note pierces the ears as if it were being done with long, rusted, dirty needles and every word of Beth is delivered with the verve of a young and angry PJ Harvery, or the practically doom-like heavy of the slow-burning, “Strife.”

This band is skilled. This band is strong. This band says what they mean and it’s so fucking intense it makes you wonder why the rest of the world is trading pictures of dinners and cats and trying to come up with clever one-liners to increase their social following. Me, I’m going to work on that theory that post-punk died when Interpol got mustaches. It’s got some revising to do.