Warning: "continue" targeting switch is equivalent to "break". Did you mean to use "continue 2"? in /nfs/c06/h01/mnt/88637/domains/blog.irockcleveland.com/html/wp-includes/pomo/plural-forms.php on line 210
 I Rock Cleveland I Rock Cleveland | The Rockometer: Calendar Days by Dick Diver 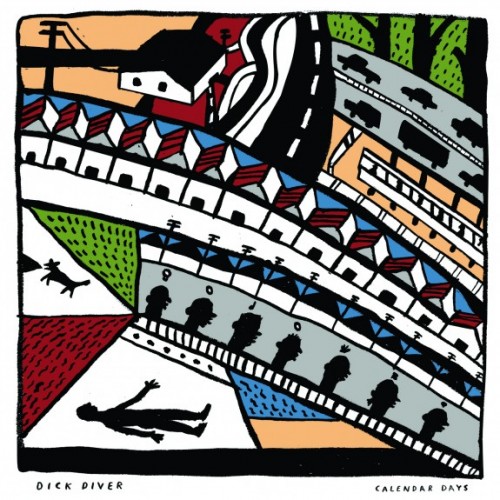 Listening to the album Calendar Days by the Melbourne quartet, Dick Diver, is like eavesdropping on conversation between two close friends at a cafe as the pair go over life’s curious demands. During its course, they cover both the big issues, dreams and aspirations, regrets and failures, and the little things like the morning’s breakfast or last night’s television. And what makes these narratives by Al McKay and Steph Hughes so compelling is even as every tale is told with similar nonchalance (McKay could capably fill in for Steven Malkmus if Pavement ever went the reunion route without their lead singer, and Hughes possesses a similarly relaxed delivery, although she recalls bands like The Shop Assistants and Electrelane when she sings), the words they choose have the ability to stop the listener dead in their tracks.  It happens on practically every cut.

Consider Hughes’ opening to Calendar Days, for instance: “It’s a high beam drive & I think of you sitting at home/You’re dad’s TV Weeks stacked to the window.” There’s enough detail in just those two lines — It being dark, and perhaps dangerous enough that the driver becomes nervy and flicks on the high beams, and the stacks of magazines, conjuring the image of a squat, ratty house in a working neighborhood, even if there isn’t much work being done in this particular house — that the song explodes and becomes a uniquely vivid portrayal of a life in a go-nowhere relationship.

The helplessness of this situation becomes even more apparent when Hughes adds, “And that old best friend is a Zamel’s ad/Bleeding ink on wet pavement or blazing on a model’s hand.” Not being Australian, I had to google Zamel’s. It’s a jeweler and I assume, like American jeweler’s, they sell the idea that eternal happiness is one ring away. Well, shit, isn’t that a bummer, but you wouldn’t exactly pick that up just from hearing the music. The arrangement is pleasant and jangly with loosely played guitar chords.

As the title would imply, many of the tracks on Calendar Days document time passing by. “Gap Life,” is another down day recounted with surprising eloquence. Hughes sets the scene with the lines, “I don’t know if it was a gap year or a gap life/But there wasn’t much going on between channel 2 and channel 9/So I went back to the beginning without raising from my seat.” Here, she’s backed by pedal steel, acoustic guitar, and slight brushes of percussion, all of which hint at the solution to this fit of boredom — If life gives you lemons, make wedges and put them into your beer.

Dick Diver isn’t an entire downer, however. There’s hope when McKay when describes his love in “Amber,” as having eyes which prepare him for the trifle’s of old age. Plus, the guitar melodies on “Water Damage” and “Alice” are bright enough to obscure life’s annoyances. Then there’s, “Bondi ’98,” a practically jubilant guitar pop number in the ’90s rom-com soundtrack vein, and album closer, “Language of Love,” a goofy spoof of Parisian lounge pop sung with a bad accent.

As tempting as it is to write “Language of Love,” off as an add-on, meant to fill the second side, it also serves as an all important reminder to keep your worries in check. And that’s true whether we’re talking about our own lives or Dick Diver’s life or a random slice of life overheard at the neighboring table.