Warning: "continue" targeting switch is equivalent to "break". Did you mean to use "continue 2"? in /nfs/c06/h01/mnt/88637/domains/blog.irockcleveland.com/html/wp-includes/pomo/plural-forms.php on line 210
 I Rock Cleveland I Rock Cleveland | The Rockometer: Modern Vampires of the City by Vampire Weekend

The Rockometer: Modern Vampires of the City by Vampire Weekend 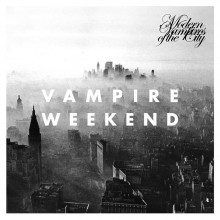 Those nerds in Vampire Weekend, with their expensive educations and fancy words, J Crew oxford shirts and indifference to our indie rock insecurities, have gone and done it again. With Modern Vampires of the City they now have a second pop masterpiece on their hands and this one may be even more confounding than their debut.

How does it work? How does their time-traveler, tourist pop which traverses continents, from the Caribbean to Sub-Saharan Africa, and spans decades, from traditional Irish-folk melodies to modern, auto-tuned radio hits not fall apart at the seems?

Led by songwriters, Ezra Koenig and Rostam Batmanglij, the band often pull off the unthinkable, like segueing from early, Jamaican ska to an Irish sea-faring melody on “Unbelievers,” from that sea-faring folk to a harpsichord melody on “Worship You,” and then they manage to cover chamber pop, world pop and synth pop on “Everlasting Arms.”

Part of the success can be traced back to the fact each member knows his role. Koenig, while fond of sending listeners to google for both his words and references, manages to keep his vocal melodies on point by erring on the side of the predictable. There’s enough going on in these songs and he knows better to gum things up by climbing up a scale where most would let the notes descend. And, he never shies away from delivering on a big chorus. Choruses do matter when you’re a pop band, and even more so when your songs skip over years between the verses.

Then, there’s the rhythm section of Chris Tomson (drums) and Chris Baio (bass). While seemingly versed in all the world’s rhythms, the two will often retreat to single beats and even take off entire measures at times. Similarly, multi-instrumentalist, Batmanglij may be schooled in everything from chamber music to ’80s cheese pop, but he, too, will often dial things down when going big just won’t do.

As a band, they’re never short on ideas, but they never overload a song. The frequent drops ensure when its time to move from auto-tuned doo-wop to a rockabilly rave up, as they do on lead single, “Diane Young,” the transitions remain smooth.

Next, pay attention to “Step.” On this tale of moving from your post-college years to honest-to-goodness, adulthood, the four members of Vampire Weekend rarely all contribute at the same time. Either the drum is out or down to one beat per measure, or the bass is out, or Batmanglij goes all quiet on the keys, making the moments when they do come together, all the more sweeter.

Yet, nowhere is Vampire Weekend more impressive than on the recently released, “Ya-Hey.” Running down the influences on this one track alone is like reading the table of contents to the History of Pop Music, Unabridged and Expanded — There’s a chamber pop movement and a steady marching band rhythm; a spoken-word passage and a chorus whose “Ya-Hey” is twisted like the reflection of a carnival mirror; there are vaguely African inflections in Koenig’s voice and a small chorus who chimes in, too. And, not once do the band sound as if they’ve gotten too nerdy for their talented selves. Instead, “Ya-Hey,” is a stone-faced dare to get off of the wall and dance and bugger of a song to get out of your head.

Perhaps, it’s fitting that Vampire Weekend are positioning themselves to be the decade’s preeminent pop band. Like no other time in modern history, the nerds are running the show. We live in an age where software companies strike gold like gold miners used to strike gold and no one can imagine living without the conveniences they’ve brought into our lives. A zombie show is one of the most popular shows on television. And after the zombie show airs on AMC, there’s an hour of a show to talk about the zombie show. It’s popular, too. Let’s not forget our Commander in Chief. Aside from the time he mixed his Star Wars with his Star Trek metaphors, he’s proven himself to be a pretty geeky dude. On Modern Vampires of the City, Vampire Weekend have proven to be as deft as the technologists and writers who have already changed our lives, and now, there’s little doubt, they’ll lead us to a better place, too.