Warning: "continue" targeting switch is equivalent to "break". Did you mean to use "continue 2"? in /nfs/c06/h01/mnt/88637/domains/blog.irockcleveland.com/html/wp-includes/pomo/plural-forms.php on line 210
 I Rock Cleveland I Rock Cleveland | The Rockometer: Desperation by Oblivians

The Rockometer: Desperation by Oblivians 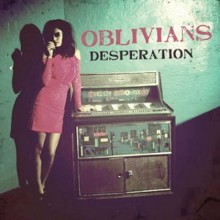 Oblivians
Desperation
In The Red Records

Workmanlike may not be the best adjective to describe Desperation, the fourth album by the Memphis garage-rock outfit, Oblivians, and the band’s first since 1997’s …Play 9 Songs with Mr Quintron, but when you put three pedigreed Rock ‘N’ Roll veterans in a studio with the sole aim of writing a hip-shaking, party rock album about booze, women, song, and so much booze, women and song that the police join the picture, the end result is really never in in doubt.

Since 1997, Greg Cartwright, or Greg Oblivian, has kept himself busy with The Reigning Sound. Eric Friedl, also known as Eric Oblivian, has always had the Goner Records store and label to go with his many musical projects. While Jack Oblivian, or Jack Yarber, has about a dozen or so bands he’s been associated with over the years.  You see, if it wasn’t going to be Desperation, there would be no new Oblivians album at all.

Although penned by Cartwright, lead single, “I’ll Be Gone,” has the same guitar screech, snotty attitude and snarling melody of deceased Memphis rocker, Jay Reatard. If it was a Friedl jam, one would instantly peg it as an homage. After all Friedl was the one who shared time in a band with the late, great rocker.

With some help from Quintron and Ms. Pussycat, the trio showcase their southern roots on “Call the Police” with a rousing mix of frenzied and fried organs, a foot stompin’ melody, and loads of the bayou blues for the “beer drinking, zydeco lover” crew. While “Pinball King,” with its mix of juvenilia and early Rock ‘N’ Roll sounds, is more reminiscent of the work The Ramones did with Phil Spector on End of the Century. Later, “Little War Child,” borrows a melody from the Velvet Underground and it’s attitude from ’76. This femme fatale is a punk rocker.

And yet, even as the style of Desperation is familiar and the songs are kept purposefully simple, Desperation isn’t such an easy album to dismiss with adjectives like rote and workmanlike. There’s just too much caked-on dirt, grit and determination; too much energy and a too cool to be schooled attitude emanating from the album’s 14, quick-hitting tracks. Greg, Jack, and Eric Oblivian may make it all seem simple as they rumble into trouble and wiggle their way out, but the ease at which Desperation rolls is not from a lack of shit giving. Rather, they give a whole lot of shits about this thing called Rock ‘N’ Roll and have the name, the album, and, presumably, the court summons to prove it.