Warning: "continue" targeting switch is equivalent to "break". Did you mean to use "continue 2"? in /nfs/c06/h01/mnt/88637/domains/blog.irockcleveland.com/html/wp-includes/pomo/plural-forms.php on line 210
 I Rock Cleveland I Rock Cleveland | The Rockometer: Drifters/Love is the Devil by Dirty Beaches 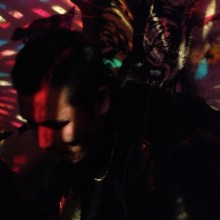 Once the music starts, the scene practically writes itself.

A lone traveler in an exotic land. It could be Central America, South America, Sub-Saharan Africa, or South Asia. The exact locale isn’t important. What is important is that our traveler is hot, sweat dripping on top of sweat hot. He’s agitated — flight delays, lost baggage, lost hotel reservation, agitated. The hotel room where he now finds himself, located on the outskirts of the city, is a bare bones affair with bed, dresser, night stand, one window without a screen, and no air conditioning. It has no television or internet connection, either. The only entertainment is a clock radio, which right now is only capable of two things: reminding the traveler how late it is and broadcasting thickly accented static. Another stiff drink is the only hope for sleep. Our traveler desperately needs sleep.

Suddenly, there’s a break in the static. A pirate radio station has claimed the airwaves and from those small, tinny speakers the most sublime sound emerges. The dance rhythms are vaguely native and the melodies sound like long forgotten cinematic scores. A man’s voice can be heard talking, grunting, sometimes singing. Is that English? Is that French? He’s a tense man, nonetheless, and he obviously wants his message and his music to be heard. Why won’t he properly annunciate his words? “I must know what he’s saying!” Stress does funny things to a man’s mind.

The traveler sits upright and pours some mostly melted ice into his mostly empty glass of whiskey. This bond must last. So must the whiskey.

The traveler reclines and for the next 30 minutes he finds an ally in this madman’s ravings. “He gets it.” The traveler says to no one in particular. The airline doesn’t get it. That clerk at the front desk who pretended not to know English? He didn’t get it, either. The traveler screams, “There are two parts to a reservation: taking the reservation and keeping the reservation!” He continues to rave, “This country is backass, backwards, but this man on the radio knows the score. He can jam.”

Exhaustion. The traveler drifts in and out of consciousness, not sure if that last bit of whiskey did the trick, no longer sure if the sound coming from the clock radio is real or a manifestation of his own exhaustion.

There are visions, too. Sweaty discos. Street drugs. Men with rifles strapped to their backs. Helicopters. Revolution in the street. The calm. The storm.

The music plays on, gradually decreasing in intensity. The man on the clock radio has stopped talking. He has stopped grunting. The beats have receded, too. “We were in this together!” the traveler exclaims, now acutely awake.

If the second half of the broadcast was meant to comfort listeners, it’s having the opposite effect on the traveler. He feels abandoned by the one man who understood his frustration with this strange land.

The traveler removes the warm towel from his forehead and gets up from his moist, sagging bed, shorts sticking to his backside like an old bandage. Outside the window, city lights flicker in the distance. Otherwise not a face can be seen, not a sound can be heard, and the heat, it’s like pressing your face up to a cast-iron frying pan fresh from the stove.

He retreats. He paces as the man on the clock radio becomes fascinated by the sound of his own guitar. Once again, sleep is but a worthy goal, an abstract notion in this hot hell called nowhere worth visiting. If only it lasted, then maybe his mind wouldn’t be racing. Maybe, he wouldn’t be staring at 2 AM. And, maybe, he wouldn’t be rifling through his suitcase. The city must have a late night disco.

Dirty Beaches’ double album, Drifters/Love is the Devil is like that — One part feverish dream and one part come down that’s more of a disappointment than a proper come down because it only will only leave you missing those fever dreams.