Warning: "continue" targeting switch is equivalent to "break". Did you mean to use "continue 2"? in /nfs/c06/h01/mnt/88637/domains/blog.irockcleveland.com/html/wp-includes/pomo/plural-forms.php on line 210
 I Rock Cleveland I Rock Cleveland | The Rockometer: King Tuff Was Dead by King Tuff

The Rockometer: King Tuff Was Dead by King Tuff 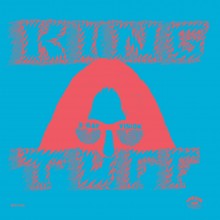 T Rex’s Marc Bolan never had a glass of red dumped on his head. But if he did, he would have never written a song about it like Kyle Thomas of King Tuff did on 2006’s King Tuff Was Dead. When Bolan wasn’t singing about boogie and babes he was riding a fucking tiger, man. As for Thomas, one gets the impression when he’s not playing the unlikely role of rock star, he’s unwinding with a couple joints in the parking lot behind the soul-sucking lunch counter where he earns enough bread to keep his thin frame fed, trying to forget the last time he got shorted.

Unlikely would be one way to describe 2006’s King Tuff was dead. Thomas embraces the underdog role. He’s a slacker and not too concerned about his lack of ambition. His voice is like that of one-time teen-idol Davey Jones, if Jones had a broken nose. Or for the younger crowd, think of Tuffy like Beiber with a smashed face, tool used to smash that face and severity of the smashed face of your own choice.

He sings high and whiny, like every word is a taunt, except it’s not, for no one realized his talent at the time — Not the women he meets who ultimately find something or someone better to do; not his mother and grandmother who wish he’d discard those tattered rags he wears; and not the record buying public who largely ignored Was Dead upon its initial release. There’s a CD promo of the initial release in my apartment in a box, in a closet, although I’m not sure which box or which closet.

The other word to describe King Tuff Was Dead would be impressive. Few songwriters have a such a complete grasp of Rock ‘N’ Roll history — From teenie bop to power pop, Beatles to the Stones, garage rock to glam — and more importantly, combine that knowledge with a style, so natural and free, that every song becomes an insatiably likable, instant hit.

There’s the sunshine boogie of lead track, “Dancing On You,” and the lovelorn power pop of “Connection;” The costumed arena rock of “Lazerbeam,” and numbers salvaged from old episodes of Top of the Pops, like “Lady;” a blistering, blazing, bottom shaking, southern rock jam called “Ruthie Ruthie,”and even a turn as an urban poet, in the vein of Jim Carrol or Lou Reed, albeit a highly self-deprecating one, with “Kind of Guy.” There’s a Bolan number sung in Bolan’s language (“Stone Fox”) and the album closer, “So Desperate.” is straight up, ’70s power pop (complete with a showy guitar solo.) Though it all you’ll be bopping, hopping and dancing along.

You may wonder how you missed King Tuff the first time around. You may even feel obliged to send a personal thank you letter and a fruit basket to Burger Records for reissuing/resurrecting King Tuff Was Dead. Don’t worry, Tuffy isn’t the type to hold grunges, and, besides, he’s got a home on Sub Pop now, meaning for the near future his name will fill the screens of Pitchfork, Stereogum and Spin every time there’s even a hint of something approaching news in the King Tuff camp.

The days of King Tuff being an unknown to the indie rock crowd are over, but man, what a time it was — The stories, the parties, the jams, the shows where not a whole lot of people showed up, and especially the jams, all of them collected on King Tuff Was Dead. Those jams were timeless.