Warning: "continue" targeting switch is equivalent to "break". Did you mean to use "continue 2"? in /nfs/c06/h01/mnt/88637/domains/blog.irockcleveland.com/html/wp-includes/pomo/plural-forms.php on line 210
 I Rock Cleveland I Rock Cleveland | The Rockometer: Ultraviolet by Kylesa

The Rockometer: Ultraviolet by Kylesa 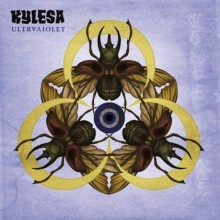 First things first, Kylesa have a sound others in the metal underground would quite literally kill for. With guitar riffs alternating between longhaired doom to pedal-stomping shoegaze, two drummers to keep the rhythms ominous and ominpresent, and two vocalists, the male of the pair (Phillip Cope), haggard and angered, with the female half, Laura Pleasants, lighter and airy, there are times I’m convinced these Savannah heavies could rule rock radio, even in the year 2013. At the very least, they’ll have you head-banging so much you’ll be left in the unenviable position of convincing your HR department that your wretched neck is in fact a work-related malady and not a bangover from last night’s show.

Unfortunately, sounding like the best band in all of the known Viking lands can only get one so far. At some point the songwriting has to kick in, and that’s where Ultraviolet comes up short. Side A of the record plays like one attempt after another after another to make the most crushing anthem the band can possibly make, and in the process, usher in a new dark age of human existence. Is the sky not black yet? More chug. More thump, More wail. Is the ocean still blue? More chug. More thump. More wail. Do flowers still bloom in bright reds and yellows? You know the answer. Let’s try again.

Perfectionism isn’t necessarily a bad thing. Some of modern music’s classics have been made by stubborn perfectionists (My Bloody Valentine immediately comes to mind). However, there’s only so much one can take before headbanging becomes wall-banging and that trip to HR is now followed by a call to the landlord to explain the new noggin sized hole in the wall.

Thankfully, variation arrives with the second side of the record. Songs like “Steady Breakdown,” a doom metal dream starring Fleetwood Mac’s Stevie Nicks with one elegant breakdown and a second, thrashing one, and “Low Tide,” a mid-tempo, electronic rock number which somehow manages to maintain a sense of ambiance with its heavy rhythm track, show Kylesa capable of so much more than Southern metal stomp. As impressive as those numbers are, “Vulture’s Landing,” may be the best of the B-side. Here Pleasents sings her melody more like a pop-diva than a metal girl, while the backing is a voluminous and brutal as ever.

Side A was intended for the long time fans. Side B was meant to draw in new ears. That’s pretty clear. However, better sequencing would have made Ultraviolet a more satisfying record for all. And even better, the band could have shown a little more trust in their own abilities. At this point in their career, Kylesa should be making a similar leap from the metal crowd to the broader hard rock audience, just as their neighbors Baroness did with their 2012 release, Yellow and Green. They have the talent. They have the sound. They just need to stop recording the same damn song.