Warning: "continue" targeting switch is equivalent to "break". Did you mean to use "continue 2"? in /nfs/c06/h01/mnt/88637/domains/blog.irockcleveland.com/html/wp-includes/pomo/plural-forms.php on line 210
 I Rock Cleveland I Rock Cleveland | The Rockometer: …Like Clockwork by Queens of the Stone Age

The Rockometer: …Like Clockwork by Queens of the Stone Age 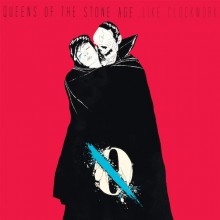 Queens of the Stone Age
…Like Clockwork
Matador Records

There was a time, let’s say every day between the day I received a promo MP3 copy of Queens of the Stone Age’s …Like Clockwork and the day I picked up my double deluxe, 180 gram at 45 RPM copy version at Cleveland’s Music Saves, where I doubted the wisdom of splurging close to $40 for this thing.

The album sounded flat and uninspired. There were too many ballads. Josh Homme sounded like Doug Downer. There was no “Feel Good Hit of the Summer,” in the literal or figurative sense. And the guest musicians, don’t get me started on the guest musicians – Trent Reznor, Mark Lanegan, Dave Grohl, Alex Turner (Arctic Monkeys), Elton John and about a half a dozen others added nothing. Ok, they did reinforce what we already knew, namely, Homme has friends in the biz. But I’ll be damned if I could pick out any one of them other than Reznor. He has a slithery scream that if you hear it once, you’ll always be able to pick it out of a group chorus.

At least the marketing scheme was slick. A fifteen minute short film was produced to boost excitement and boost it did. By releasing it three minutes at a time, each three minutes featuring a different album track, the band assured themselves they’d be on the front page of every music zine for a week straight.

Then, something happened. I brought that heavy, double deluxe, 180 gram at 45 RPM version of …Like Clockwork home and put it on my turntable. The music came alive.

Now, I was hearing a clean, crisp and deep, dynamic, nuanced and detailed album, the same type of recording critics gushed over when Daft Punk released Random Access Memory a few weeks back, except, this was a rock album. When was the last time you put a rock album on your turntable and marveled at the sound? Not the songs, mind you, but the actual sound.

Listen to the bright, bulbous keyboards of “Vampyre of Time and Memory” and one can literally smell the stank weed and patchouli stew clouding your view of a vintage lava lamp and black light Black Sabbath poster on this interpretation of everyone’s going stark, freaking mad era Pink Floyd.

Sleek, sexy and slightly funky during the verse and all big burly man in the chorus, “If Had a Tail” would have been the single if “My God Is the Sun” hadn’t claimed the spot first. It’s the audio accompaniment to every Josh Homme photo ever snapped.

And, my god, “My God is the Sun.” Initially weak-kneed and wobbly, like a sailor on an extended bender who only rights himself for fistfights, the chorus arrives with hammer blows of snare and hi-hat. The guitars ratchet at spitfire speed. Then comes the biggest hammer blow of them all, as each and every amp is set strip the guts straight from your stomach with a deafening rumble.

Even “Smooth Sailing,” a track I had placed in the reject pile early on has its moments. The rhythm section is Zeppelin-esque in every sense of the cliche with undertones of “Immigrant Song” distinctly audible in the bass and drums. No, John Paul Jones wasn’t one of the guests, but it sure sounds like Homme, Jones, and Grohl brought Their side-project Them Crooked Vultures back for this one. Later, the screechy guitar scales make one think of another someone who did guest on the album, Trent Reznor, who like Jones didn’t actually contribute to this track.

Still, as I’ve learned to appreciate …Like Clockwork for what it is: the best sounding rock album to come across these ears in years, some elements of my initial take down remain — There are still too many ballads, there isn’t one real “Feel Good Hit of the Summer,” and I still can’t tell what the hell Elton John did in the studio besides sign his name on the guest list. I don’t, however, regret spending those 40 bones. …Like Clockwork will be part of my collection for years to come.