Warning: "continue" targeting switch is equivalent to "break". Did you mean to use "continue 2"? in /nfs/c06/h01/mnt/88637/domains/blog.irockcleveland.com/html/wp-includes/pomo/plural-forms.php on line 210
 I Rock Cleveland I Rock Cleveland | 2013 Pitchfork Music Festival: Yo La Tengo 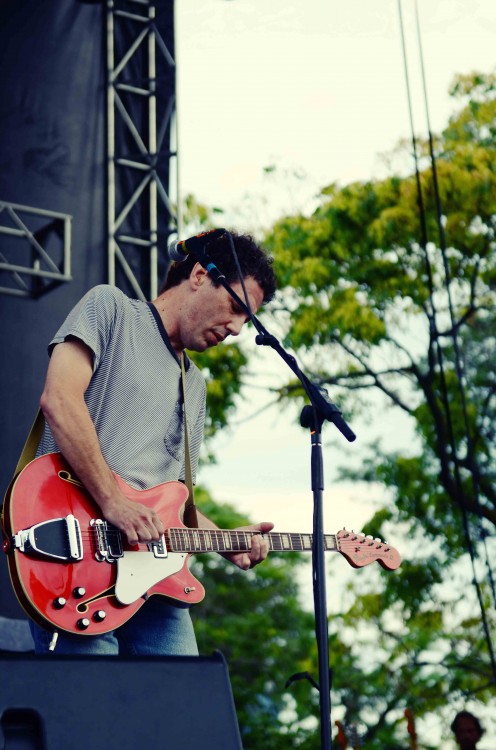 Hey look everyone! It’s Uncle Ira, Uncle James and Aunt Georgia! They made it to the cookout!

If you’re one of those who has never had a chance to see Hoboken indie rock lifers, Yo La Tengo, live, it would be easy to dismiss them based on their appearance alone. Today Ira Kaplan had his finest, grey t-shirt, while James McNew and Georgia Hubley sported their best Sunday button-downs, all dressed for the Sunday family gathering with barbecue and friendly backyard games.

They don’t come off as especially animated, either. At one point during his band’s Sunday set, Kaplan, perhaps sensing the absurdity of his band following rapper, El-P, and preceding R&B, rap and dance artists like ‘Lil B, Toro y Moi, M.I.A, and R. Kelly, deadpanned to the crowd, “While Georgia makes her way to the front of the stage, let me say once again how glad we are to be opening for R Kelly. We toured together in Europe in ’96.” 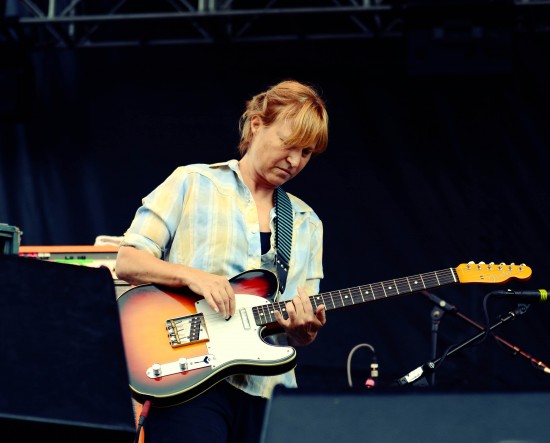 What those who’ve never seen Yo La Tengo don’t realize, however, is that Kaplan is a secret shredder. Hell, he may be the most underrated guitarist active today. While the trio rightfully receive praise for their bottomless bag of influences and their ability to record and perform in any, and I mean any, popular music style, few single out Kaplan for his shredding.

Today, with their normal two-hour set condensed to less than an hour, Kaplan took every 15 seconds, 30 seconds, and every minute he could find to shred. He added screech to the motorik groove of “Stupid Things,” and squelch to the two-minute pogo pop of “Nothing to Hide.” He didn’t shred during the slow, acoustic version of “Tom Courtenay.” That would have been silly. And during their Beach Boys cover, “Little Honda,” he teased and was surprisingly content to strum the same chord for a minute.

He was saving himself for the finale. For a solid five minutes, Hubley methodically hit her drums, one at a time. McNew stood behind the keyboard and played the same chord. While over at the corner of the stage, there was Kaplan, kneeling before his guitar, coaxing slight creaks out of it.

Eventually, the drums picked up pace. McNew may have even played a different chord, and Kaplan stoop up and started playing something like a melody. It was “Blue Line Swinger” from their album Painful and Kaplan was just getting going. His eyes reached back in his head, like a man possessed, and he began attacking that six string thing — Bashing chords with the palm of his hands, twisting every available knob, until it was woefully out of tune, swinging it around in the air like a children’s play thing. Beautifully garbled and gnarled static filled the air and all the while, McNew and Hubley kept a steady beat.

When it was time to bring the melody back and finish, “Blue Line Swinger,” Kaplan needed a freshly tuned guitar. He shreds like that. 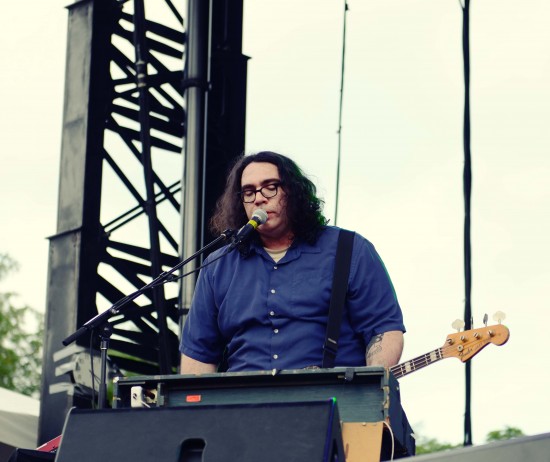