Warning: "continue" targeting switch is equivalent to "break". Did you mean to use "continue 2"? in /nfs/c06/h01/mnt/88637/domains/blog.irockcleveland.com/html/wp-includes/pomo/plural-forms.php on line 210
 I Rock Cleveland I Rock Cleveland | The Rockometer: I’m Rich Beyond Your Wildest Dreams by Diarrhea Planet

The Rockometer: I’m Rich Beyond Your Wildest Dreams by Diarrhea Planet 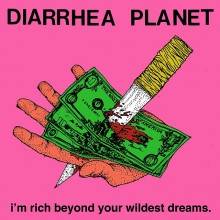 Diarrhea Planet don’t care what you think about their shitty band name. If they did, do you think this band of Nashville shredders would have chosen the name Diarrhea Planet in the first place?

Diarrhea Planet has a one item agenda, and that action item is to rock the fuck out, truly and forever, like those arena rock legends whose prime passed before their birth.

Sure, you can get your throwback rock fix from any number of bands these days. That duo, Japandroids, from Vancouver have an unironic love of the American anthem, too. Hell, you can even see sixty-somethings on those same arena stages with the laser light shows and pyro. What sets Diarrhea Planet apart, however, is their conviction. Watch this video for “Ghost with a Boner,” from the band’s first album, for example.

Ghost with a Boner

This band lives it and believes it. Ok, maybe they don’t believe the part about a spirit unexpectedly poking people with an invisible, throbbing member. That’s silly. But they do believe in rock. They believe in turning it up, man. And, they believe in a little more everything from the sound man, then a little more guitar.

In many ways, “Separations” is the Diarrhea Planet song. It’s a throwback anthem sent threw the blender of ’70s punk and ’90s grunge and contains the band’s mission statement right there in the lyrics: “Cuz right now is the best time/Dumb and young/And full of fire.”

“Field of Dreams,” has more of pop-punk feel to it. “Kids,” meanwhile, is one of those cigarette lighter, hold your lady tighter, kind of ballads. And, “Babyhead” combines the simple one-two-three-fours of the Ramones with a relentless number of guitar solos.

You see, in the Diarrhea Planet universe, there is no good or bad rock music. A top jam is any one which can transform a dive bar or a DIY joint into Madison Square Garden for a night and any one which can take away the pain during that awkward stage of life where age says your an adult, but the daily grind says otherwise. Meaning, with an album full of top jams, I’m Rich Beyond Your Wildest Dreams is the bitchin’ Camaro in the drive, a case of Busch Light in the fridge, and front row tickets to Kiss on the Friday your heart was broken. You gotta admit, even without the babe, it’s still pretty sweet.