Warning: "continue" targeting switch is equivalent to "break". Did you mean to use "continue 2"? in /nfs/c06/h01/mnt/88637/domains/blog.irockcleveland.com/html/wp-includes/pomo/plural-forms.php on line 210
 I Rock Cleveland I Rock Cleveland | The Rockometer: An Object by No Age

The Rockometer: An Object by No Age 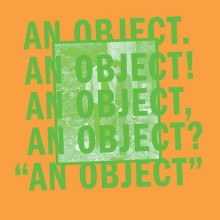 No Age
An Object
Sub Pop

In the span of six years, between the time No Age burst onto the scene with Weirdo Rippers, a collection of lo-fi shredders and ambient soundscapes, the duo of Randy Randall (guitars) and Dean Sprunt (vocals/drums) have gone from being a band of the moment to one out of step with the rest of the world.

2013 is a time of instant gratification. On-line conversations are held 140 characters at a time. Even videos, one of the web’s staples for much of the past five years, have been cut down to six second clips. And, don’t get me started on lists. Oh, those fucking lists that every website publishes these days are nothing more than a lame attempt to get you to click on something, anything before you get distracted by some other shiny new thing on the internet. There’s a reason that your city went from the fittest to the fattest in one year, and is simultaneously the best place to raise a family and the worst place for start-ups and it has nothing to do with the truth. It has to do with page views. Please, DON’T CLICK ON THAT LIST!

So it makes total sense (in the sense it makes no sense at all) that No Age would choose 2013 as the year to release An Object, their most thoughtful and complete album to date.

The physical album itself, a bright neon thing, opens up like an invitation. When the four sides are peeled back, one finds four inserts printed on heavy stock, in the same neon green and safety orange color scheme as the album cover. Remove the cards and on the reverse side of the front cover, one finds a stamp. It reads “Inspected By: No Age Mfg. It’s signed by either Spunt or Randall. You see, No Age assembled all of the initial releases themselves, and they really did inspect each and every one.

The music, itself, shows a similar attention to detail. The mix is a challenging one where parts one would expect to feature prominently, like a bitchin’ riff, are buried deep, obscured by other sampled sounds.  Lead track, “No Ground,” for example has some sweet beach pop, “Ooh Wah Oohs,” which hit near the end of its run. And I missed them the first ten times I played An Object. “Generator” has a guitar melody which sounds like Peter Hook playing bass for New Order, but damn, there’s so many other competing melodies it’s easy to miss that one, too.

“C’mon Stimmung” isn’t as subtle. It’s overloaded with samples and guitar tracks, but this time each are aligned for maximum rock satisfaction. It’s only twist being that the samplers carry the melody in the chorus where one would expect Randall to stomp and shred.

Listen again, Randall does shred like a student of Mascis, Moore, and Young. It’s that upside down mix playing tricks on your ears.

Even the more spacious numbers, Like “An Impression,” contain such details when you actually stop and listen. That violin you hear is not a violin and that rhythm track is actually three separate rhythm tracks, maybe more. My ears are still busy breaking this one down.

On the B-side, “Running from A-Go-Go,” has such audible delights as the sound of sputtering engines, radio static, and squeaky wiper blades. With the all-encompassing “Field Recordings” listed under percussion in the liner notes, the duo may just have augmented their tale of a lonely late night drive with the actual sounds of a lonely late night drive in a tour van on the wrong side of its better days. “Circling with Dizzy,” takes another turn at flipping noise punk upside down. Think Lou Barlow and Sebadoh at their gnarliest and Lou Barlow’s tape machine at its hungriest. Album closer, “Commerce, Content, Commerce” is An Object’s most sublime moment. It’s the type of ambient track Brian Eno, himself, would have made had he undergone the same grueling, reset process Spunt and Randall underwent to make this album.

An Object isn’t for everyone. An Object isn’t for content farm workers and smart phone addicts. From their dedication to both the physical and audio presentation of their latest release, not to mention all of the work that went into the prep and packaging of the initial run, No Age have made that much clear. Instead, An Object is an album for those who long for those slower days when everyone wasn’t expected to be connected in both the real life and the on-line one. An Object is a love letter to those who still hold an album in their hands and try to piece together a puzzling release with only those things contained within the actual release — A record, a cover, and liner notes. Those people are still out there and this is their album to cherish.