Warning: "continue" targeting switch is equivalent to "break". Did you mean to use "continue 2"? in /nfs/c06/h01/mnt/88637/domains/blog.irockcleveland.com/html/wp-includes/pomo/plural-forms.php on line 210
 I Rock Cleveland I Rock Cleveland | Riot Fest Sunday Night: The Replacements 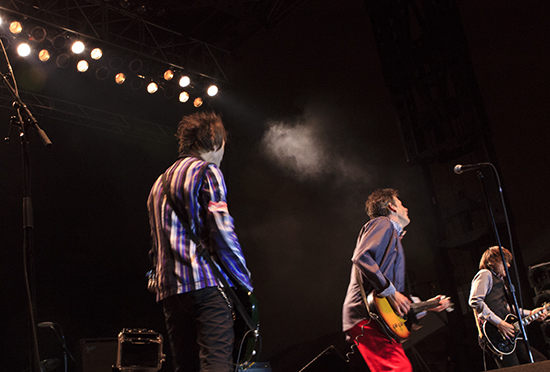 The abridged history of The Replacements goes something like this: Beloved underground rockers from Minneapolis have a real shot at greatness, but whether it was the booze, discomfort with high expectations, or just bad luck, they never fully delivered on their potential.

One night they could be brilliant. Paul Westerberg’s tales of longing and disillusionment set to rowdy, blues-based bar rock and ragged punk stuck to the hearts of anyone who spent time with their albums, or caught them on a good night.

The next night, however, they’d be shit. To wit, the band’s best documented live performance can be found on the bootleg, The Shit Hits the Fans, where a fall-down drunk unit slops their way through 19 covers and five originals. There was never any in between for Westerberg, Tommy Stinson (later Slim Dunlap), Bob Stinson and Chris Mars, who as a unit, seemed to take pride in messing with expectations throughout the ’80s.

Prior to The ‘Mats improbable headlining on Sunday night at Humboldt Park in Chicago, the band’s history was on everyone’s mind. The pre-show chatter shifted between “I can’t believe I’m here to see The Replacements!” and “C’mon guys, don’t fuck this up!”

The ‘Mats didn’t fuck it up at Riot Fest, and they didn’t mess with anyone’s minds. Well, that is unless your name was David Minehan and you were the touring guitarist for the night, then your mind may be fucked. But we’ll talk more about that later. We have a ‘Mats show on our hands 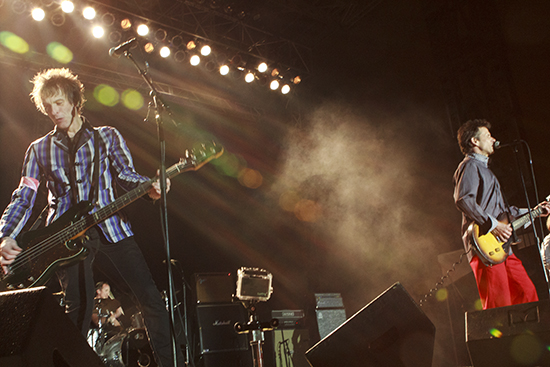 Both Westerberg and Tommy Stinson were fully aware how special this night was to the fans who crammed the Riot Stage. Stinson tried casual, with his mussed about hair and plaid jacket. It wouldn’t last. He was as visibly geeked as the crowd.

Westerberg would be a tougher cookie to crack. Taking the stage in red pants cut above the ankles, a button down with a fancy collar, high, striped socks and sneakers, he looked like an urban cyclist on date night. And while, “Hi, we haven’t played in three weeks,” wasn’t the warmest of welcomes, once adrenalin kicked in Westerberg was as amped as the rest of them. The band, with consummate pro Josh Freese on drums, was loud, a little bit sloppy and fast, just like the Replacements should be, as they ripped through “Takin’ a Ride,” “I’m in Trouble,” and “My Favorite Thing.” Maybe there was a slight crack of a smile on Westerberg’s face. Maybe.

Six songs in, with the band just having thrashed through “Color Me Impressed” and “Tommy Got His Tonsils Out,” there was little doubt The ‘Mats were back. There was no evidence of the old in-fighting that plagued the band prior to their surprise revival. Nothing could ruin these good vibes, right? Even that moment when Westerberg lost his place in the middle of the toned-down, electric ballad, “Androgynous,” because he had to work in a shout out to Joan Jett (she played Riot Fest on Friday night), didn’t ruin any one’s high. That was a fun fuck up. We all laughed with him.

Plus, the band had purposely back-loaded the set with all of their shoulda been hits. To stand in the middle of a crowd, thousands upon thousands strong, and hear all those voices sing every word to “Alex Chilton,” and know when they sang, “I’m in love/what’s that song?/I’m in love/with that song,” that all of those hearts and minds were focused on one band and one moment, was a special feeling, indeed. Nothing could fuck this up, nothing except Minehan.

As the band swayed through the downtrodden and down-tempo, “Swingin’ Party,” Paul found it the proper time to tell Minehan to cut it with all that Cure shit. When his ears were still hearing too much echo, he walked over and stepped on one of Minehan’s guitar pedals to make the point even more obvious.

No one knew what to make of this moment. Was it a bit of intentional theater? Westerberg was smiling as he offered suggestions to his guitarist.

However, once Westerberg offered more criticism after the country-rocker, “Waitress in the Sky,” that first incident didn’t seem quite so staged. Sure, he laughed, once again, as he told Minehan, “We can have Bob Mould up here in a second, buddy.” This time, however, Westerberg’s agitation was still visible once those biting words had settled.

You see, tonight we got the perfect Replacements show. There was a little bit of The Replacements as dicks and a whole lot of the Replacements as geniuses. Both the fans and the band gave the show a memorable ending with the poppy and positive, “Can’t Hardly Wait,” and the hard-charging punk of “Bastards of Young.” Hell, unless you’re a Romney, you had to be moved as the crowd roared along, “Dreams unfulfilled, graduate unskilled/It beats pickin’ cotton and waitin’ to be forgotten/We are the sons of no one/Bastards of Young!” And unless you were there, you wouldn’t understand how the two-song encore of “Hold My Life” and “IOU” was the farthest thing from a guarantee, on this, only the second show of The Replacements’ three-show reunion tour.