Warning: "continue" targeting switch is equivalent to "break". Did you mean to use "continue 2"? in /nfs/c06/h01/mnt/88637/domains/blog.irockcleveland.com/html/wp-includes/pomo/plural-forms.php on line 210
 I Rock Cleveland I Rock Cleveland | The Rockometer: Fuzz by Fuzz

The Rockometer: Fuzz by Fuzz 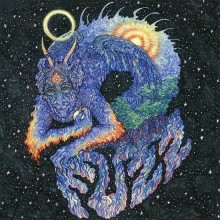 Fuzz
Fuzz
In the Red

Ty Segall and Charlie Moothart, the two principles in Fuzz (now joined by Roland Cosio on bass), have the chops to convincingly deliver an album proto-metal in the 21st Century. Segall, of course, has been releasing garage rock albums, with the emphasis on rock, at a dizzying pace during the past five years. Moothart, meanwhile, has personally contributed to two Segall albums, one album by the Ty Segall Band, and two albums by San Francisco scene-mate, Mikal Cronin. In other words, both men know their way around a studio.

Fuzz’s novelty, of Segall leading from behind the drum kit, hardly matters when lead guitar duties are in such capable hands. Moothart utilizes every weapon in the shredder’s arsenal as he freely switches between thick, sturdy and burly blues, fingers on fire solos, and blatantly showy squawks of wah-wah. It’s as if Fuzz is his personal audition for the next opening in Black Sabbath and damnit, if he didn’t nail it this time.

“Sleigh Ride” is practically a manual for aspiring heavy bands with its stomping introduction knicked from the Yardbirds’ garage and enough filthy riffage in the meat of the song to satiate the stoutest acolytes of late ’60s heavy. Segall’s vocals, meanwhile, sound distant, as if a stationary mic caught one sentence at a time as he shouted from a speeding muscle car.

“What’s In My Head,” makes an even cleaner connection to the blues. Here, a basic progression is played on bass and drums with but a speck of guitar to be heard until the first chorus. That’s the moment the whole thing blows up. The soft-loud-soft dynamics hint at what grunge would have sounded like had the influence of the ’70s and ’80s been omitted.

Therein lies Fuzz’s one true weakness. In their pursuit of faithfully recreating a specific moment in rock history, they lose sight of the larger picture. This isn’t the ’60s or the ’70s. No one really wants to hear a drum solo, not even Rush fans. The year is 2013 and Segall is capable of so much more. His latest solo album, Sleeper, featured a quieter, more introspective voice that could have used some of Fuzz’s power to shake some life into what was a largely meek affair. Conversely, Fuzz could benefit from a down moment or two. As magnificent as Moothart can be, having two sides filled with one dominating guitar riff after another can lead to listener fatigue. Somewhere, between Ty Segall solo and Fuzz there is another classic album to be had. To get there, however, one has to be willing to skip around.