Warning: "continue" targeting switch is equivalent to "break". Did you mean to use "continue 2"? in /nfs/c06/h01/mnt/88637/domains/blog.irockcleveland.com/html/wp-includes/pomo/plural-forms.php on line 210
 I Rock Cleveland I Rock Cleveland | The Rockometer: Corrupt Free Enterprise by Obnox 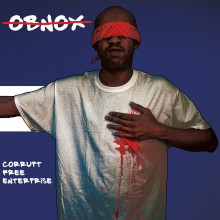 At the wrong side of 40, Cleveland’s Lamont “Bim” Thomas is an unlikely savior of Rock ‘N’ Roll. I’m not sure Thomas would even own up to the label, himself. To say either Rock ‘N’ Roll is dead or I’m the one to save Rock ‘N’ Roll is to open oneself up to a whole heap of internet ridicule. Hey Fall Out Boy, how’d that saving Rock ‘N’ Roll crusade go for you?

Thomas does realize that Rock ‘N’ Roll has its problems, however, and he is not shy about speaking up. There’s the primary white problem (as identified in his recent Pitchfork interview) and the secondary white problem: All of the people who are playing rock music these days seem to be white, and all of that white rock music being made has no knowledge of its roots.

It used to be one could count on a white man to co-opt the black man’s musical ideas. Jimmy Page never met a black bluesman’s guitar lead he couldn’t claim as his own. These days, when a rock musician looks to his roots for inspiration, we end up with something like Mumford & Sons instead. Something’s not right here. Obnox is the correction.

On his second full-length, Corrupt Free Enterprise, Thomas has expanded beyond the scrappy, lo-fi bedroom punk of his debut and has found a way to record blues, soul, gospel, garage, and hip-hop with the same urgent and blasted to bits aesthetic as his early throw down and thrash punk numbers.

His vision is so complete that it’s difficult to tell without liner notes whether any given song is a Thomas original or a cover. There’s plenty of both on this record. More importantly, as Thomas digs through his record collection for inspiration, and the punk songs begin to sound less like punk songs and the gospel songs sound less like gospel songs, Corrupt Free Enterprise becomes a cohesive, knowledgeable album, the likes of which just doesn’t get made too often these days.

Indeed, the same man who rages over west-coast hardcore, “I wanna fuck you like a puma,” can easily transition into the dirty, urban proto-punk of “Ghost.” One track later, and he’s delivering fractured soul on “Reflection,” and old skool hip-hop over a blown-out sub-woofer (“Deep in the Dusk.”) “Swimming Blues” and “Being Cleveland” both recall the earlier, grimier work of the White Stripes, and “When Will I See You,” takes its cues from Southern spirituals. There’s little Thomas can’t do as Obnox.

Well, he can’t save Rock ‘N’ Roll on his own. And unless people start listening to the man’s music, all of his effort will accomplish about as much as sermon preached to the choir on Sunday morning. To reach his ultimate goal of changing the culture of Rock ‘N’ Roll he’s going to need some help, like your money in exchange for records and rock shows, and your belief that Rock ‘N’ Roll is being done all wrong and Obnox is one answer.