Warning: "continue" targeting switch is equivalent to "break". Did you mean to use "continue 2"? in /nfs/c06/h01/mnt/88637/domains/blog.irockcleveland.com/html/wp-includes/pomo/plural-forms.php on line 210
 I Rock Cleveland I Rock Cleveland | Play Me: “Not Over” and “Hunger Split” by Pleasure Leftists

Play Me: “Not Over” and “Hunger Split” by Pleasure Leftists 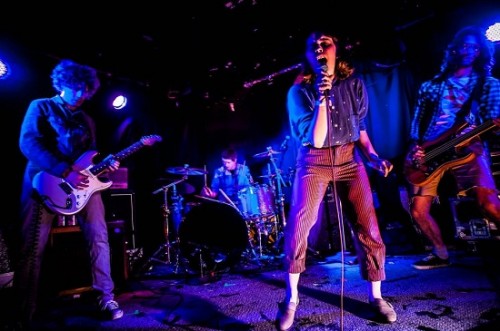 Depending on who you ask Cleveland is either a shit-hole, a place young people need to escape and suburbanites need to avoid after dark, or an up-and-coming city with underappreciated culture and low rent. The real Cleveland is somewhere in between. In fact, I often compare Cleveland to a patchwork quilt, with nice squares abutting the shit-holes and little to no warning that you’re nice patch is going to abruptly end at the next intersection.

One thing Cleveland detractors and supporters can agree on, however, is that our city has grit. It’s an old manufacturing town with the sturdy buildings of that era. Both those who have stayed within the city’s limits and those newcomers like to talk about their resilience. The adjective sophisticated rarely comes into the conversation.

Yet, here’s this band, Pleasure Leftists, a post-punk band from our fair town, and they ooze sophistication. Upon hearing their metered beats and smooth, clean guitar lines paired with confident vocals one pictures Berlin, London, or New York, not an up-and-coming former shit-hole, like Cleveland.

Pleasure Leftists have got glitz, not grit. They’re got precision, where the populace, particularly sports fans, prefer panic. They are the shiny and sophisticated art museum five blocks from the shittier, shit-hole, East Cleveland. You know the one. That MOCA building is tough to miss as it sits on Euclid Avenue, the main drag through University Circle. Should Pleasure Leftists deliver more jams like “Not Over” and “Hunger Split,” from their just released EP, people are going to start noticing Cleveland’s sophisticated music, too. Quality tends to stick out like that.

You can steam the entire EP at Bandcamp. Vinyl copies can be found locally at Hausfrau Records in the Gordon Square neighborhood or online at Deranged Records. Photo by C Anderson.