Warning: "continue" targeting switch is equivalent to "break". Did you mean to use "continue 2"? in /nfs/c06/h01/mnt/88637/domains/blog.irockcleveland.com/html/wp-includes/pomo/plural-forms.php on line 210
 I Rock Cleveland I Rock Cleveland | Ranked: Live Videos of Diarrhea Planet’s “Ghost With a Boner” from Excellent to Rad to Bitchin’

Ranked: Live Videos of Diarrhea Planet’s “Ghost With a Boner” from Excellent to Rad to Bitchin’ 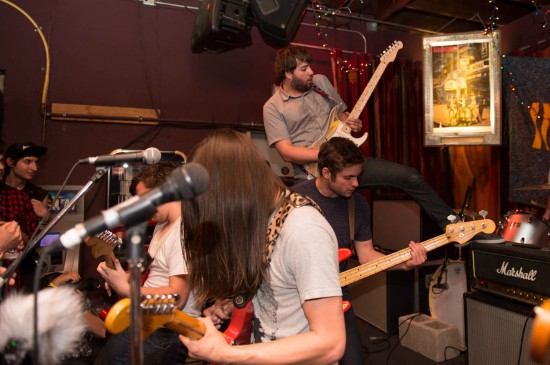 What makes Diarrhea Planet’s “Ghost With a Boner” the ultimate Rock ‘N’ Roll part song? Um, have you tried to sing the words “Ghost with a boner” while keeping a straight face? It’s impossible not to have fun when you’re in a small, sweaty club and the sweaty, stinky masses are all shouting “Ghost with a boner.”

Just put aside for the moment your own doubts on the existence of spirits. I know, if they existed we would have found at least one on Ghost Hunters, Ghost Hunters International or Ghost Hunters European Vacation by now. We haven’t. Just put aside for the moment, the logistics of it all. I know, a boner requires a rush of blood, not a rush of ectoplasm in some thing that doesn’t even exist in the first place. Put aside all of your reservations about a band called Diarrhea Planet who embrace the Rock ‘N’ Roll cliche. This is meant to be fun, and here are the videos, from excellent to rad to bitchin’ to prove it.

“Ghost With a Boner” with shredding atop a ramp at a skate and surf show in Florida.

“Ghost With a Boner” with more gear climbing and more acrobatics

“Ghost With a Boner,” the front row experience.

“Ghost With a Boner at the famed Stone Pony in Asbury Park. Bruce couldn’t have done it better.

At CMJ 2011, we have crowd-surf guitar and some serious head-banging from both band and fans

“Ghost With a Boner” can also be used as a fill in to “Happy Birthday” when copyright law prevents public performance.

One of the earliest, and one of the most viewed “Ghost with a Boner” videos, filmed in May 2010 with crowd surfing and a stage invasion.

Photo of D-Planet via MTV Hive