Warning: "continue" targeting switch is equivalent to "break". Did you mean to use "continue 2"? in /nfs/c06/h01/mnt/88637/domains/blog.irockcleveland.com/html/wp-includes/pomo/plural-forms.php on line 210
 I Rock Cleveland I Rock Cleveland | The Rockometer: “it’s a big world out there (and i am scared)” by Kurt Vile

The Rockometer: “it’s a big world out there (and i am scared)” by Kurt Vile 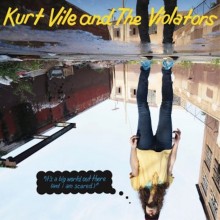 Kurt Vile’s latest EP, “it’s a big world out there (and i am scared)” is either a record for completists or a record for a record company to squeeze every last dollar out of their consumers (depending on how cynical you feel). I happen to like Matador Records, so let’s say it’s a record for completists. The two alternate takes from his recent album, Wakin on a Pretty Daze, “Never Run Away (String Synth)” and “Snowflakes (Extended)” are just as listed. The former adds string synths to the mix and the latter has a longer running time that the original version. Two other cuts, the short instrumentals, “(Reprise Reprise)” and “NRA Reprise,” are similarly expendable. That leaves us with three tracks of note on a seven track EP, and of those two, “The Ghost of Freddie Roach” is the one worth seeking out. The reminiscent tone of Vile’s voice as he eases out “Back in the day when we were young whipping every one,” is perfectly mirrored by a side-winding and sliding guitar melody. Eventually, the vocals reduce themselves to barely perceptible whoos and oohs, as Vile rides that solo for all its worth. “The Ghost of Freddie Roach” would have made for an ace closing track, or, perhaps, a much sought after 7″. On an album of ephemera, however, it’s all too easy to overlook its brilliance.