Warning: "continue" targeting switch is equivalent to "break". Did you mean to use "continue 2"? in /nfs/c06/h01/mnt/88637/domains/blog.irockcleveland.com/html/wp-includes/pomo/plural-forms.php on line 210
 I Rock Cleveland I Rock Cleveland | The Rockometer: Jimmy Bell’s Still in Town by 15-60-75 (Numbers Band) 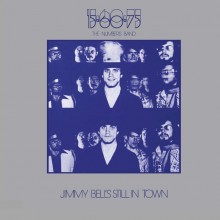 Keep Austin Weird. Keep Portland Weird. Keep Cleveland Weird. Every city worth its salt want to be weird these days. It’s how you attract the young ‘uns to live in the city’s core.

However, as weird as you think Cleveland is these days with its large tracts of post-industrial brown fields, a thriving scrapping industry, underappreciated arts and square pockets of hip, there was a time our town was even weirder.

Back in 1975, a band by the name of 15-60-75 opened up for Bob Marley and The Wailers at the Cleveland Agora. They were regulars in the Kent scene, often playing three or four nights in the row at the same bar. On this night, one can imagine the usual response for an opening act, a tight group of die-hards pressed up against the front of the stage, surround by the talkers, the preeners, and the can’t be bothered until the other band comes on people.

Or, once that opening groove of “Animal Speaks” hits, one can imagine an entirely different scene. This was Northeast Ohio rock at its weirdest, and some would contend its best, and the opening band won over the crowd. The liner notes suggest my first guess was the right one. The crowd chanted “Wailers” and cheered when one last song was announced.

Still, the Numbers band soldiered on, determined to blaze this night.

Like Pere Ubu, the music collected on this live set, Jimmy Bell’s Still in Town, is maddeningly difficult to categorize. Though at this point in the band’s history, their heritage could already count members of Devo and The James Gang, and a brother of Chrissie Hynde of the Pretenders, calling them a punk band, a blues band or even a rock band doesn’t feel quite right.

The rhythms are often robotic and repetitive, like early krautrock. Guitarist Robert Kidney’s vocals, meanwhile, are delivered tersely, like a street poet, or a street preacher, or a street vendor, or any old man who spends too much time on the streets. Add to this mix, the freewheeling saxophones of Terry Hynde and Tim Maglione and you get something quite unlike anything going on in Cleveland, then or now. Later on in the set, the title track adds Afro-Caribbean percussion to the mix, because, let’s be honest, what preceded it wasn’t nearly wild enough.

The strangest part of it all, however, isn’t the opening for Marley part, or the local legend of the Numbers Band being the inspiration behind the Blues Brothers part, or even Gerald Casale of Devo spending time in the band and getting kicked out of the band for wearing a monkey mask on stage part, it’s that it works, period. Not only is Jimmy Bell’s Still in Town certifiably weird, but it is wholly essential, too. It not only showcases the merits of following your own tune, but also the virtues of practice and perseverance. This is a record that could have only been made by a tight band of musical eccentrics, men who took in every piece of outsider music and designed a way to make it their own. Then they gigged and practiced and gigged and practiced and gigged some more.

We all want to be weird, right? For Cleveland musicians, this is where you start.