Warning: "continue" targeting switch is equivalent to "break". Did you mean to use "continue 2"? in /nfs/c06/h01/mnt/88637/domains/blog.irockcleveland.com/html/wp-includes/pomo/plural-forms.php on line 210
 I Rock Cleveland I Rock Cleveland | The Rockometer: Celebration by Birds of Maya

The Rockometer: Celebration by Birds of Maya 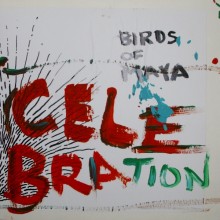 As a music reviewer, I’m prone to exaggeration. It’s part of the job. You hear an exquisite piece of music and you rack your brain for the right adjectives to make the world notice. Sometimes it gets over-the-top.

This, however, is no exaggeration: The A-Side of Birds of Maya’s Celebration is the greatest, gnarliest, most rockingest 20 minutes of Rock ‘N’ Roll music pressed to vinyl in the past ten years. And, not only is it the greatest Rock ‘N’ Roll you’re liable to hear in many a year, it’s the greatest example of Rock ‘N’ Roll music that practically no one has heard. Originally limited to 350 copies of vinyl with hand-painted covers (no digital or CD release), the album sold out before I even realized it was on sale. A repress has been promised ever since. That long overdue repress finally arrived in the past this past week and holy fuckin’ hell, you have no idea.

The A-Side, labeled only as “Picnic,” as it was recorded during a neighborhood party in Philadelphia in 2012 called the Kensington Picnic, can be broken down into four movements. The first, we’ll call “Son of a Bitch.” It begins with a basic, barroom blues progression in the rhythm section before guitarist Mike Polizze barrels in with a lead riff reminiscent of Nazareth’s “Hair of the Dog.”

The second section is easily recognizable as a variation of “The Cross Road Blues,” the standard established by Robert Johnson and popularized by Eric Clapton and Cream. This bleeds into “Some Kind of Mettalica,” a section named after the heavy metal heroes because this is where the trio gets metal in a Ride the Lightning and Master of Puppets kind of way. The final movement is one which doesn’t need a made up name, it’s The Stooges’ classic, “TV Eye.”

Through it all, the power trio — Polizze on guitar, Jason Killinger on bass, Ben Leaphart on drums, is relentless. There’s barely a second of dead air to be found on “Picnic.”

Polizze’s playing, meanwhile, is epic in the truest sense of the word. While informed by the Mascis and Moore school of guitar playing (he’s loud, blown-out and rambunctious like those alt-rockers), he’s also more in tune with the blues. One can hear a bit of Jimmy Page in his playing, for like the Zeppelin axe-man, Polizze arena-sizes those old-timey melodies. Page, however, never let himself go in the way Polizze does. And that is the third ingredient to the playing of Polizze and Birds of Maya. They jam like they’re in a punk band, unafraid to go headlong into a technical passage, but skilled enough to keep the wheels from rolling off of the damn thing as they’re shredding and thrashing and jamming and jam-thrashing. Impressive isn’t the word and we haven’t even discussed the B-Side, “BBQ” with Harmonica Dan.