Warning: "continue" targeting switch is equivalent to "break". Did you mean to use "continue 2"? in /nfs/c06/h01/mnt/88637/domains/blog.irockcleveland.com/html/wp-includes/pomo/plural-forms.php on line 210
 I Rock Cleveland I Rock Cleveland | The Rockometer: Punk 45: Kill the Hippies! Kill Yourself!; There Is No Such Thing as Society by Various Artists

The Rockometer: Punk 45: Kill the Hippies! Kill Yourself!; There Is No Such Thing as Society by Various Artists 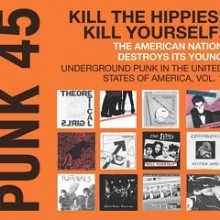 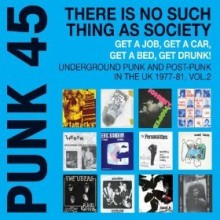 Various Artists
Punk 45: There Is No Such Thing as Society
Soul Jazz Records

Why? Why, as we near the 40th anniversary of punk rock’s birth do we need one 2XLP of underground punk from the USA recorded between the mid-’70s and 1980 and another 2XLP from the UK, dating from ’77 to ’81? The practical answer would be that Soul Jazz records recently put out a book of hundreds of 7″ covers from that era and these two records collect those actual sounds.

Yet, to characterize these 45 tracks as another attempt at profitting off of a genre defined by an outsiders’ distrust of the capitalists’ system would be a disservice to the curatorial work of the label. Turn over the cover. Start reading the titles. You won’t find the Talking Heads, Patti Smith, the New York Dolls or The Ramones on Kill The Hippies! Kill Yourself? Nor, will you find now familiar acts like the Sex Pistols, The Clash, The Jam, or The Buzzcocks on the UK album, There Is no Society. The closest we get to a household name is Johnny Thunders and the Heartbreakers, who are represented by “Chinese Rocks,” on the fourth track of the fourth side of Kill the Hippies! Kill Yoursef!

You see, this is no ordinary punk history. The punk history you’ve been told is that of the winners, those bands who were able to rise from the sticky, beer and piss stained floors of CBGB’s to the top floor, corner offices of high-paid, and highly greased, record executives. Influential, Northeast Ohio bands like electric eels, Pere Ubu, The Bizarros, and The Pagans never experienced such success in their day. In most histories they are the footnotes. Even here, in their hometown, the importance of these bands in the larger history of punk is only recognized by the obsessive, collector class of rockers.

On Kill the Hippies! Kill Yourself! the bands of the early Cleveland and Akron punk scenes are the stars, along with lesser celebrated acts from LA, San Francisco, Philadelphia, and Seattle. These bands scratched together their savings to record a 45 on their own labels and the labels of their friends. Some times, they even stuck around long enough to record another 45 and an LP. More often, they were forgotten. No more.

The aim of Kill the Hippies! Kill Yourself! becomes even more apparent when you drop the needle on side one, track one, “I’m a Bug,” by LA’s The Urinals. Self-released on the band’s own Happy Squid records, this primitive basher, and others like it, would outlive its modest beginnings to become a lasting influence to acts as wide-ranging as Black Flag, The Minutemen, Yo La Tengo, and No Age.

Cleveland’s electric eels, meanwhile, managed to become both underground famous and infamous in just five gigs. Provocative and ultra-violent, few wanted anything to do with the eels. In December ’74, they wound up sharing a stage with Rocket from the Tombs and The Mirrors at the Viking Saloon’s “Special Extermination Night,” a gig that would go on to be the ten-cent beer night of the Cleveland rock scene. Many more claim to have been there than actually were in attendance. The second installment of “Special Extermination Night” in ’75 would end early for the electric eels, as the staff didn’t appreciate the band’s use of a gas lawnmower as an instrument — Something about safety and wanting to avoid a Cleveland lawnmower massacre. The band would break up long before Rough Trade sourced the band’s rehearsal tapes for the release of “Agitated” in ’78.

The career The Pagans would follow a similar trajectory, with only four 45s recorded during their original, ’77 – ’79 period, effectively flaming out before they could parlay their regional success into anything bigger. Still, mention The Pagans in the right circles and eyes will light up. Listen to a song like, “Not Now, No Way,” and it’s easy to see why many hold the band in such high esteem. Their music serves not only serves as the link between the original wave of punk bands and ’80s hardcore, but also between early punk and the high-octane garage rock of bands like The New Bomb Turks. The Pagans were only a missing link if you didn’t know where to look.

There Is No Such Thing As Society, takes a similar approach to chronicling punk in the UK, working the fringes to unearth long forgotten, but historically important singles. Here, the biggest names are buried deep in the liner notes. Chrissy Hynde of The Pretenders spent some time in Johnny Moped (although she doesn’t appear on the compilation track, “Incendiary Device.”) Nicky Hallam of Roses Are Red (“Can’t Understand”) would go on to found Stereo MCs. Kevin Rowland of The Killjoys, represented by “Johnny Won’t Get to Heaven,” is better known as a member of Dexy’s Midnight Runners.

And once again, side one, track one, serves as a mission statement for the rest of the collection. The Users’ “Sick of You,” enjoyed modest success in the UK, moving around 20,000 copies, but the band didn’t have the resources to survive past their second single. Overshadowed by bigger name acts, few comps have room for “Sick Of You.” Sick doesn’t even begin to describe the introductory riff. Years later, Poison would change a couple notes, put some lipstick on it and have a bona fide hit.

The Mekons, meanwhile, would fill the role as the lesser known commodity on the compilation. Although their stature lags far behind those of better known UK punk acts, they have managed to fashion career for themselves in punk rock. Their early single, “32 weeks,” perfectly captures the growing disillusionment of British youth as their country crashes headstrong to the right. If only getting a real job and adult status items was as simple as bashing a couple chords and snarling about it.

Later, “Leave Me Alone” by the Scabs delivers a tight, and vulgar, anthem to personal freedom that was recorded two years to late (’79) to be considered a classic, and The Cigarettes tease, arena rock aspirations in their not quite punk, not quite power pop, and never much noticed “They’re Back Again, Here They Come.” Fans of the Buzzcocks should take note.

Far from a liability, the relative anonymity of these 45 tracks collected across four LPs is the collection’s strength. Too often the history of punk rock is condensed to New York and LA; The Sex Pistols, The Clash, CBGB’s and The Ramones. Dissatisfaction with government, personal opportunity, and music was not a New York and London thing, it was a common thread in smaller, less-celebrated scenes, too. All they lacked was the cultural cachet (and marketing money) of those other cities. Cleveland didn’t have a Malcolm McClaren. Cleveland had burned out factories, electric eels, Pere Ubu, and The Pagans, and as it turned out, talented promoters were better at moving records than abandoned buildings.