Warning: "continue" targeting switch is equivalent to "break". Did you mean to use "continue 2"? in /nfs/c06/h01/mnt/88637/domains/blog.irockcleveland.com/html/wp-includes/pomo/plural-forms.php on line 210
 I Rock Cleveland I Rock Cleveland | The Rockometer: Burn Your Fire For No Witness by Angel Olsen

The Rockometer: Burn Your Fire For No Witness by Angel Olsen 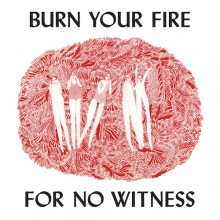 Angel Olsen
Burn Your Fire For No Witness
Jagjaguwar

Angel Olsen could always sing. Hers was a devastating voice, both quaint and soulful, charming in a folksy kind of way. She opened her mouth, and out of this unassuming woman came the legendary sounds of someone like Linda Rondstadt.

Angel Olsen didn’t always have the music to back up her voice. Earlier releases were penned and performed by Olsen on electric or acoustic guitar. To here her put it, they were born out of old-fashioned, DIY necessity. Similarly, she’ll tell you that there was no grand plan to make Burn Your Fire For No Witness a rock album. Again, the songs were a natural progression from performing and touring with a full band. If there was a change in her tone, it was a happy accident.

My lord, if “Hi-Five” was a happy accident, can you imagine what Olsen could cook up if she was actually trying to rock? When Olsen’s wavering voice is paired with a honky-tonk rhythm and super-sized fuzz guitar, as it is here, the results are utterly flooring.

The full band approach not only helps Olsen succeed on other country rockers like “Forgiven/Forgotten” and “High & Wild,” but her ballads get a boost, too. “White Fire,” is a slow burner set in a barren, unforgiving landscape. Her voice is again the focus, as she whispers her tale of love and loss with a slow moving organ and a lonesome guitar picking the same lonesome chords until the burden of being becomes overwhelming. In this context, a subtle bit of slide guitar carries as much weight as a vocal wail.

Should Burn Your Fire for No Witness feel front-loaded, it’s not from a lack of quality on the back end. “Lights Out” is the sound of a seasoned veteran of The Grand Ole Opry, like Dolly Parton, not an unassuming indie-folk singer. Later, on “Dance Slow Decades,” Olsen borrows the phrasing and pace of a jazz singer, and to the surprise of no one who’s been listening this far, she nails that style, too. Rather, Burn Your Fire For No Witness slows near its end because its damn impossible to improve on perfection.