Warning: "continue" targeting switch is equivalent to "break". Did you mean to use "continue 2"? in /nfs/c06/h01/mnt/88637/domains/blog.irockcleveland.com/html/wp-includes/pomo/plural-forms.php on line 210
 I Rock Cleveland I Rock Cleveland | The Rockometer: Motivational Jumpsuit by Guided by Voices

The Rockometer: Motivational Jumpsuit by Guided by Voices 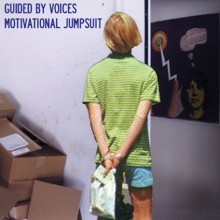 With Motivational Jumpsuit, the fifth full-length of new material by the “classic” Guided by Voices lineup since 2012, we’ve officially entered the business end of the reunion. There was a band casualty — Kevin Fennell was abruptly canned after trying to sell his GBV drum kit on eBay for a ridiculous sum. Stories have been floated claiming the band in its current incarnation has run its course.

Long time fans of the Dayton band shouldn’t have been surprised by either development. Guided by Voices have a long, storied history in the American rock underground, and that story has had its share of dramatic turns. Losing a drummer is nothing compared to the time when Robert Pollard lost an entire band and replaced them wholesale with Cleveland’s Cobra Verde.

Neither should long term fans be surprised by the quality of work presented on Motivational Jumpsuit. Robert Pollard and co-conspirator, Tobin Sprout, are expert songwriters. That fact is unassailable. And when the two are focussed, as they are here, Guided by Voices can be as thrilling as they were during their ’90s peak.

Clocking in under one-and-a-half minutes, “Littlest League Possible,” sets the stage with a straight-forward burst of power-pop.

Of the five modern GBV albums, Motivational Jumpsuit is the loud one. It’s not just “Planet Score,” but “I Am Columbus,” “Zero Elasticity” and “Alex and the Omegas” all place those same gut-blasting guitars heard earlier, right front and center for the listener.

Not to be outdone, Tobin Sprout counters Pollard’s arena rock fantasies with more measured, mid-tempo numbers and ballads. With a somber tone, and a weeping electric guitar lock step with the acoustic, “Shine (Tomahawk Breath)” is the most memorable Sprout number of the bunch.

A Guided by Voices album wouldn’t be a Guided by Voices album without an unexpected turn or two. Some call these one-minute digressions like “Evangeline Dandelion,” “Child Activist” and “A Bird With No Name,” toss-offs, or album fillers. Others cite Pollard’s non-existent quality control. I prefer to think of them like intermissions, insignificant on their own, but helpful in absorbing the larger work.

Pollard offers his own philosophy on the Guided by Voices album on the two minute rocker, “Vote For Me Dummy,” as he sings, “Vote for me dummy/I’ll tell you the truth and I’ll tell you a joke/The ultimate good move/Life would be a piece of cake.”

Guided by Voices fans don’t have just one Guided by Voices album. They have ten albums in their collection, and ten 45s. Their votes were cast long ago and this mix of rockers, ballads, and jokes is the reason they continue voting with their dollars every time a new GBV album is released. I am no exception.