Warning: "continue" targeting switch is equivalent to "break". Did you mean to use "continue 2"? in /nfs/c06/h01/mnt/88637/domains/blog.irockcleveland.com/html/wp-includes/pomo/plural-forms.php on line 210
 I Rock Cleveland I Rock Cleveland | The Rockometer: Steve Hears Pile in Malden and Bursts into Tears by Krill

The Rockometer: Steve Hears Pile in Malden and Bursts into Tears by Krill 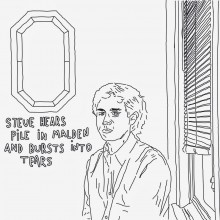 Emo, in of itself, is not your enemy. Think about it. Emo’s legacy can be traced back to punk rock, which is cool, and the more technical strains of indie rock, like Built to Spill, which is also cool. The problem with emo as a genre came about when the bottom feeders engaged in a sick race to document the most pathetic, and the most bloody breakup ever. Dying in a car crash because your dream babe left you wasn’t good enough. That car had to have fire, Hollywood fire. And the girl had to die, too, because she realized she made a mistake in dumping the dorky dude in dorky glasses. She had to die in a Hollywood wreck, too. In no time at all, guys with feelings and guitars became their own worst enemy.

Not that the Boston band, Krill, are emo, but with an EP title like Steve Hears Pile in Malden and Bursts into Tears, and with that EP’s centerpiece, “Turd,” featuring a narrator in the throes of depression imagining himself as a piece of shit and then a peanut (at least a peanut is eaten before it goes down the pipes), one could start to draw conclusions, like, these dudes me be a little too touch-feely for comfort. Don’t do it.

With a songwriting style that veers heavily from the simple, verse-chorus-verse, standard of Rock ‘N’ Roll, those steadying moments become even more important. If there’s one group of musicians rockers like to hate more than emos, it’s jam-bands. The best rock bands and the best rock albums are masters of the human mind. They maintain a balance between serious and serious fun. “Unbound Nameless Future” could use less jamming. “Fresh Pond,” like “Turd,” before it, has the formula perfected. It’s skillful and free; It’s quiet, then loud; It wanders and then wails with every watt of electricity in the joint.

It’s a fine line, Krill are walking on Steve Hears Pile in Malden and Bursts into Tears. For much of the 21st Century, indie rock bands have favored simplicity over technical acumen, and fantasy over real-life emotion. Their best song is about shit! It takes balls to go against the grain, and, critically, Krill has both the balls and ability to make their next LP a breakout one for the band.