Warning: "continue" targeting switch is equivalent to "break". Did you mean to use "continue 2"? in /nfs/c06/h01/mnt/88637/domains/blog.irockcleveland.com/html/wp-includes/pomo/plural-forms.php on line 210
 I Rock Cleveland I Rock Cleveland | The Rockometer: S/T by Ruined Fortune

The Rockometer: S/T by Ruined Fortune 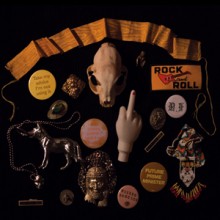 For the past five-plus years, Australian rock music has been on an incredible upswing. It began with Melbourne’s Eddy Current Suppression Ring, who released three well-received albums of post-punk, garage rock and trash on Goner Records. From the Eddy Current Suppression Ring sprang side-projects, like the more rustic rock band, Boomgates and the synth punk of Total Control. And it wasn’t just the side projects getting headlines. American and UK indies began releasing albums by the likes of Slug Guts and Royal Headache (the best Jam band, as in The Jam, not named the Jam) and Blank Realm, whom if you haven’t heard, are one of the most forward thinking punk bands on the planet. Matador Records included Aussies Royal Headache, Dick Diver, Lower Plenty and Bits of Shit in their 7″ subscription club. It seems every month a new Australian band catches the ears of stateside tastemakers and blows fucking minds. Are you ready to get your mind fucking blown again? Say hello to Ruined Fortune.

The Sydney duo of Nic Warnock and Angie Garrick have been around long enough  to produce a long list of bands, ex-bands, and side-projects. Their credits include Southern Comfort, Bed Wettin’ Bad Boys, Circle Pit, Model Citizen, Straight Arrows, Exotic Dog, and Angie. It’s cool. I’m at a loss with a lot of those names, too. The important thing to take away from this bit of history is Warnock and Garrick have finally hit their creative stride as Ruined Fortune.

Like a lot of their contemporary Aussie rockers they have a unique ability to take in many of the same underground bands, but synthesize them in such a way that the tried and true sounds fresh. For Ruined Fortune, the guitar growl of Sonic Youth’s Lee Ranaldo and Thurston Moore is an obvious starting point. Lead track, “In a Hole,” is a fuckin’ howler of abstract racket. Yet, when you begin to listen closer, it becomes apparent that this isn’t just a couple players wailing in the garage. There’s easily four, maybe five complimentary guitar melodies composing the overriding ruckus. The fact that the vocal melody wouldn’t sound of place on an old Motor City proto-punk track only adds to its allure.

For Ruined Fortune, the studio is another instrument. “All Seeing Eye,” may first grab your attention with its sick doom metal riff lifted from the ’70s, but, again, there’s much more to the mix — That one guitar sounds like an entire team of smokey shredders and the precisely wrecked snare hits, sound like two teflon pans smashing,

On “Transparent Faces,” the duo does urban, art-rock better than anyone not named the Velvet Underground (and again with a 15 person team of shredders) and on “On the Screen,” they make the fuzzed out and desperate guitar clang the Jesus And Mary Chain interesting again. Like “In a Hole,” it’s another cut where multiple guitar tracks, from the clattering to the colossal, compete for air space. The Stooges, with or without Iggy Pop, could only dream of making a cut as ferocious as “Black and Red” in 2014.

Clearly, despite Hozac’s labeling of Ruined Fortune’s debut as a freedom rock record, this isn’t your Uncle Fred’s 2-CD collection of capital “F” and capital “R” Freedom Rock. To Garrick and Warnock, the term freedom rock is a literal one. Massive jams are tempered with the abstract noise of “Closing Till” and “That Strain, That Spark / End of the Day.” On their own, these cuts aren’t master thrashers.Yet, they play a pivotal role in the album, allowing the ears time to regain their focus. Speaking of which, let’s hope Ruined Fortune keep the focus on this outfit for more than an album or two. From the sound of this debut, they’re amped to blow mind after fucking mind for years to come.