Warning: "continue" targeting switch is equivalent to "break". Did you mean to use "continue 2"? in /nfs/c06/h01/mnt/88637/domains/blog.irockcleveland.com/html/wp-includes/pomo/plural-forms.php on line 210
 I Rock Cleveland I Rock Cleveland | The Rockometer: Guilty of Everything by Nothing

The Rockometer: Guilty of Everything by Nothing 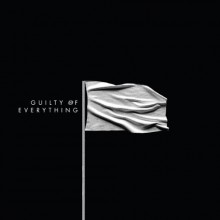 Nothing
Guilty of Everything
Relapse

Nothing are not your average, new shoegaze band. For one, the label of home of this Philadelphia outfit, Relapse records, is a metal label. In other words, Relapse bands don’t do cute. Secondly, there’s the case of Nothing’s lead singer, Dominic Palermo. Around the turn of the century, he fronted the hardcore punk band Horror Show. It was during that time he was picked up for a stabbing and spent two years behind bars. Nothing is his first serious foray back into music since Horror Show ended, well, horribly.

More than mere trivia, Nothing’s back story can also be head in the tracks themselves. While light, airy vocals and wavering, wall of sound guitars, two hallmarks of the original UK shoegaze scene, are immediately audible upon pressing play, the rougher edge of Nothing is just as identifiable. The guitar solos have have heft, so much so, one can imagine longhairs headbangin’ during the more intense moments of tracks like “Dig.”

Perhaps a better comparison for Nothing would be ’90s space rockers, Hum. For not only do Nothing songs have an audible thump, they also play tempos besides stand and blank-eyed stare.

Yet, as much as the personal history of Nothing can be heard in the music, the same can’t be said about the words. No longer a screamer, Palermo sticks to his shoegaze whisper throughout much of Guilty of Everything, leaving any turmoil expressed behind the microphone largely undecipherable to the listener. The man has to know something about crime and punishment, about damnation and redemption. The story of Nothing and the music of Nothing hint as much.