Warning: "continue" targeting switch is equivalent to "break". Did you mean to use "continue 2"? in /nfs/c06/h01/mnt/88637/domains/blog.irockcleveland.com/html/wp-includes/pomo/plural-forms.php on line 210
 I Rock Cleveland I Rock Cleveland | The Rockometer: The Future’s Void by EMA

The Rockometer: The Future’s Void by EMA 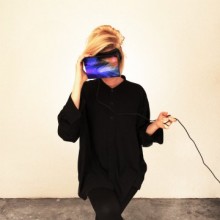 Beginning with her previous band, Gowns, the songs of EMA’s Erika Anderson have always been deeply personal, often painful. Anderson, as they say, is an open book and within those pages Anderson freely shared tales of drugs and betrayal, anxiety and depression, and yes, the occasional triumph, too.

The Future’s Void, Anderson’s first album for Matador Records, marks a noted departure. While musically, Anderson still delivers a compelling and mutable mix of noise, drone, and lo-fi electronics, the pages that inspired Anderson this time around were not her own diary, but that of William Gibson’s landmark cyberpunk novel, Neuromancer, and the banal, non-stop flow of information streaming from the internet.

Like Gibson, Anderson also has a prophetic touch. In talking with Rolling Stone, Anderson revealed that lead single, “Satellites,” was recorded before Edward Snowden showed the world how the NSA was everywhere up in everyone’s personal information all the time. Even had Anderson known what we all know now, it’s hard to imagine “Satellites” being more paranoid. Forceful, brutish beats, crack like electricity in the sky and when they’re paired with the sounds of classic sci-fi gizmos, one begins to feel the enormity of our security state. There is no off the grid.

The slight ballad, “3Jane,” meanwhile, is the sound giving in, or giving up to technology. When privacy is no more than a dream, submission becomes a more enticing option with every passing day.

In the same Rolling Stone interview, Anderson was quick to point out that while The Future’s Void was inspired by the interaction between modern technology and modern beings, it’s not a concept album. Thank god. Even if too few musicians are tackling tricky tech topics in their songs, an entire album of man versus the machine would get heavy right quick. That’s where “So Blonde” comes in. It’s comfortable tempo and well-timed growls are the sound of a happy place, like ’90s alt-nation MTV with a well-worn couch and a full bag of Cheetos.

If there’s one reason why more artists don’t write songs about our internet overlords, besides the fact that the biggest artists are narcissists who like selfies, it’s that it’s difficult to tackle the absurdity of internet culture without sounding well, absurd. The Future’s Void,  closing track, “Dead Celebrity,” is case in point. By tinkering with the familiar melody of “Taps” and then juxtaposing it with verses about the fleeting love for a unnamed, and recently dead, celebrity, Anderson nails the critique, but the song itself, feels forced, even awkward. An album this powerful deserves a more fitting bookend, along the lines of opening track, “Satellites,” or “Neuromancer,” a track we haven’t even mentioned yet. That one’s a scorcher, too. It has a Bollywood beat MIA would dig and all of the electric tension of the opener.