Warning: "continue" targeting switch is equivalent to "break". Did you mean to use "continue 2"? in /nfs/c06/h01/mnt/88637/domains/blog.irockcleveland.com/html/wp-includes/pomo/plural-forms.php on line 210
 I Rock Cleveland I Rock Cleveland | Your Guide to Surviving (and Enjoying) Record Store Day in Cleveland

Your Guide to Surviving (and Enjoying) Record Store Day in Cleveland

Although Record Store Day won’t celebrate its seventh birthday until Saturday, it’s already entering its awkward teenage phase. Some shop owners have become disillusioned with the glut of limited edition releases, especially those from major labels (I’m looking at you translucent Ghostbusters 12.”) Record store patrons complain about eBay flipping. It’s not uncommon to hear both groups compare the day to Black Friday.

Yet, for all the kvetching, the stores will open early on Saturday, April 19th, and people will still be lined up for the opening of the doors. After all, local shops like Music Saves and My Mind’s Eye typically post their biggest sale days of the year on Record Store Day. And even the most jaded shoppers have to admit it’s kinda fun waiting in the cold with your fellow music fans for the doors to open. Unlike the real Black Friday, there’s no fighting in line, or in the store. Vinyl collectors are friendly. They want to know what you’re angling to pick up. They want to know what other stores you plan to visit. They want to tell you about that time they were in the Beachland Tavern for the Black Keys’ first Cleveland show (them and 5000 other people from Cleveland in a venue that tops out at 200). Patience, perspective and planning are the keys if you want to survive.

1. Make a list. There are hundreds of titles being released this coming Saturday. Know what you’re looking for before you start looking through the racks. The days of Tower Records are over. Record stores are no longer meccas, but smaller, corner shops. Music Saves, especially, isn’t a big place. A little prep will mean less stress later.

2. Cross-reference your list with what the local shops plan to carry. Music Saves has listed every title they plan to carry for Record Store Day. My Mind’s Eye hasn’t published a list, but they do plan to have an even more extensive selection of Record Store Day releases. Dude took out a loan to stock his shop for Saturday. Loop in Tremont will publish what they plan to offer on Friday. Many of the local Exchange locations will carry a small number of titles.

3. Dress warmly. People will be queued outside Loop, My Mind’s Eye and Music Saves, and all of those people may not fit inside the store at 8 AM. The queues will begin forming between 6 and 7 AM. You know how during baseball games the announcers complain about how brutal the weather is when its 50 in April, even though we just had a polar vortex ravage our winter? That’s going to be you on Saturday morning if you don’t wrap yourself in winter clothes. Don’t be Tom Hamilton.

4. Don’t feed the flippin’ trolls. No one likes the eBay flipper. I’m not sure the eBay flippers like themselves. On the spectrum of human scum they reside somewhere between hypocritical televangelists and anti-vaxers. However, if you can’t complete your shopping list in town where else can you go besides eBay and Discogs? Well, believe it or not, those ridiculous prices you see online for Record Store Day releases will drop if you’re patient. Check the on-line sites in May or June and the price on that elusive, limited edition vinyl will have dropped by 50%. It happens every year.

4. Don’t be a dick. Look, everyone has their list and everyone has been waiting outside, but not everyone is picking up that record you gotta have. There’s no need to be an aggressive shopper. In fact, the opposite approach often yields the best results. Should your eyes light up with the record of your dreams, but your arms are two inches too short, ask the person next to you to snatch a copy. Really, this works in record stores. We are not savages who fight over flat screens. We’re decent folk.

Now, if you want to have fun, there’s an entirely different, and much shorter, set of rules.

1. Let the collectors have their space. The crowds will begin to dissipate sometime between 10 and 11 at which point, the casual shopper will find the experience much more pleasurable. Don’t know where to go? Cleveland is blessed with record stores. Try Music Saves and Blue Arrow in Collinwood, Loop in Tremont, Hausfrau in Gordon Square, or My Mind’s Eye in Lakewood. Music Saves carries mostly new releases. Hausfrau, Loop and My Mind’s Eye have a mix of old and new. Blue Arrow focuses on vintage releases.

2. Have fun. Many of the local stores will be running events to coincide with Record Store Day. The Beachland Tavern, located down the street from both Blue Arrow and Music Saves, has scheduled a matinee show with Filmstrip, The Commonwealth and Insurance Salesman. Georgia and Ira from the legendary, indie rock band, Yo La Tengo, will be doing a dj set at Blue Arrow Records. It’s like your whole day is planned for you and all you have to do is show up, smile, and maybe buy a record or two. You are now a part of Record Store Day. 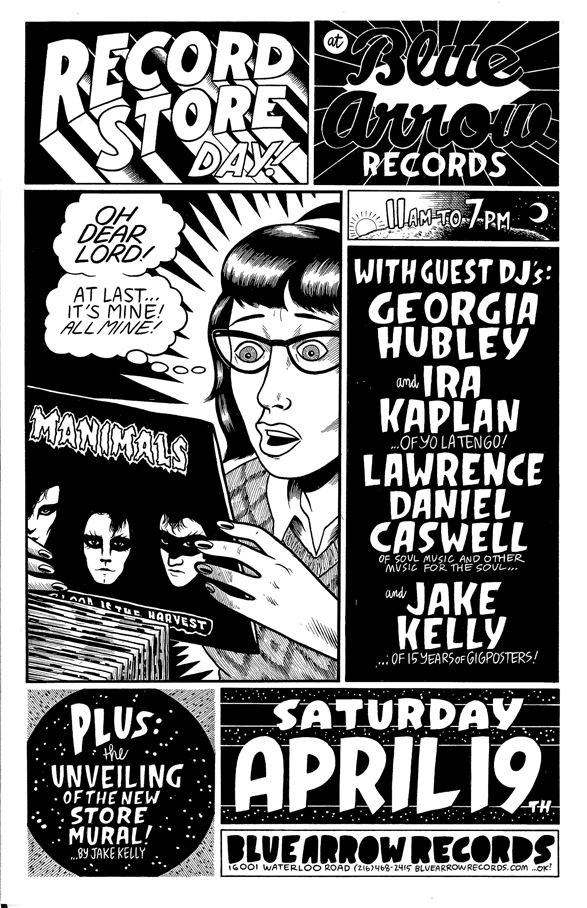