Warning: "continue" targeting switch is equivalent to "break". Did you mean to use "continue 2"? in /nfs/c06/h01/mnt/88637/domains/blog.irockcleveland.com/html/wp-includes/pomo/plural-forms.php on line 210
 I Rock Cleveland I Rock Cleveland | The Rockometer: A Letter Home by Neil Young

The Rockometer: A Letter Home by Neil Young 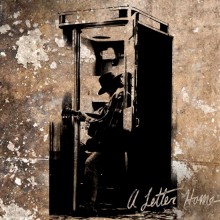 Neil Young’s A Letter Home is quite the novel record. It’s not a novelty record. That is an important distinction. Young isn’t covering Dr. Demento’s Greatest Hits (Those expecting to hear Neil’s take on the classic, “Fish Heads,” can bail now). Rather, A Letter Home is novel record is the dictionary sense of the word, new or unusual in an interesting way.

For A Letter Home Young visited the White Stripes’ Jack White in Nashville, TN where the two of them recorded on vintage 1940’s recording gear. Young, himself, has described A Letter Home as a time capsule. That seems apt. The record, itself, is lo-fi in a way modern technology, not even ’70s or ’80s technology, could replicate. The sound is thin and tinny. The mind has to work to fill in the rest of the mix. It sometimes wavers and sounds warped. The last track on each side, particularly, will have you scrambling to your turntable to ensure you don’t have a blunt needle.

When sent through the White and Young time machine, songs like Dylan’s “Girl From the North Country” and Springsteen’s “My Hometown,” sound like relics, as if they are unearthed Woody Guthrie originals. It’s just Young and a guitar, some times a harmonica, and some times a piano instead of the guitar. White can be heard clearly, or as clear as could be expected, adding backing vocals to Willie Nelson’s “On the Road Again.”

The physical record, as in the packaging, =even gets in on the time capsule game. On the back cover, there’s a printed sticker for a record store, Robinson Radio, where A Letter Home went for $3.99. Needless to say, your copy of A Letter Home will retail for a significantly higher price. The inner sleeve is discolored and already has ring wear.

And therein lies the problem with pretending it’s 1940 in 2014. With A Letter Home, White and Young were wildly successful in making a ’40s folk record, but who, outside of folk music historians wants to listen to a ’40s sounding record today? After a few listens, the novelty does indeed wear off, with the warping, in particular, a detail which would have been better left for the historians. Eventually, you’ll be pining for the 2014 tech version of A Letter Home, the one which doesn’t sound shittier than it needs to be.