Warning: "continue" targeting switch is equivalent to "break". Did you mean to use "continue 2"? in /nfs/c06/h01/mnt/88637/domains/blog.irockcleveland.com/html/wp-includes/pomo/plural-forms.php on line 210
 I Rock Cleveland I Rock Cleveland | The Rockometer: Drop by Thee Oh Sees 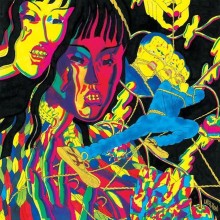 Back in the fall of 2013, Thee Oh Sees’ mastermind, John Dwyer, announced to a home town crowd in San Francisco, “This will be the last Thee Oh Sees show for a long while. So dig in.” The internet being the internet, interpreted that statement as if the band was breaking up, or, at the very least going on an extended hiatus.

As if. Since 2008 Thee Oh Sees have averaged at least three releases a year. They’re always good for a new LP, a single, and an EP or a compilation. Productive people like Dwyer don’t go on hiatus. They may move to Los Angeles, as was the reason for the announced break, and then they pick up where they left off.

And Drop does indeed pick up where the band had left off on recent releases like Carrion Crawler/The Dream (2011), Putrifiers II (2012), and Floating Coffin (2013). The band have been trending heavier and less whimsical and Drop is no different. You may have to wait for a few bleeps and a few blips to make way, but the opening riff on side one track one, “Penetrating Eye,” is as heavy as anything the band have put to record. Think early Black Sabbath, or the riff factory that is Ty Segall’s retro rock band, Fuzz.

Staggered guitar chords and gradual, intensifying drum hits set up “Encrypted Bounce” for similar big rock action. Yet, as anyone who’s paid attention to Thee Oh Sees over the years can tell you, this band is anything but predictable. Expect a riff racket and you’ll get free form psych out instead.

Even as the band finds a steady groove mid-album with “Put Some Reverb on My Brother” and “Drop,” two relatively, tame garage rock numbers, you know their freak-addled ADHD will get the better of them. And it does. “Camera (Queer Sound)” is down-tuned, in an almost grunge kind of way and “King’s Nose” follows that up with a bit of theatrical pop from the British Invasion era. While the strings and horns on album closer, “The Lens” make it one of the steadiest and most ornate numbers in the band’s catalog.

If Dwyer was indeed saying goodbye, “The Lens” would be a fitting end. Instead, think of it as the sound of settling in. Drop skips around, needlessly at times. The hyper instrumental track, “Transparent World,” in particular, sounds out of place following “King’s Nose” and preceding “The Lens.” That sweet come down, again, tells you everything will work out fine for Dwyer in Los Angeles. The rent is cheaper than San Francisco. There’s more sunshine. There are fewer glassholes. Give him a couple months, nah, a couple weeks, and Thee Oh Sees will be back to full freaking weird on their next LP.