Warning: "continue" targeting switch is equivalent to "break". Did you mean to use "continue 2"? in /nfs/c06/h01/mnt/88637/domains/blog.irockcleveland.com/html/wp-includes/pomo/plural-forms.php on line 210
 I Rock Cleveland I Rock Cleveland | The Rockometer: Get Back by Pink Mountaintops

The Rockometer: Get Back by Pink Mountaintops 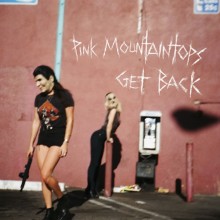 Pink Mountaintops
Get Back
Jagjaguwar

On one hand, I feel vindicated by Grayson Haver Currin’s review of the new Pink Mountaintops record, Get Back, in which he slams an entire record because he can’t stand one song (“North Hollywood Microwaves”). I’ve done the same thing. And, I’ve had to defend myself vigorously in the comments for doing such a thing. If you’re an album listener, one song can make a dramatic difference. It can absolutely wreck the listening experience.

Still, I can’t shake the feeling that some of his criticism of the track is misplaced. Sure, if you take the words of guest-rapper, Annie Hardy, at face value, all of her verses about cum are dumb. Furthermore, by including lines about sucking off bears, black and polar, the one-time member of Giant Drag ensures her guest spot is as unpleasant as possible. And, if you’re being literal, as someone whose byline is three fancy names has no choice but to be literal, one can even drop the sexism bomb, because that’s what people with three names who engage in outrage do.

What if “North Hollywood Microwaves wasn’t meant to be taken literally? It’s a crazy idea, I know, but the cartoon voice in which Hardy raps is a big fucking hint, like a flashing neon sign fucking hint, that we’re dealing with an absurdist work, a satire of Hollywood’s sexy image. And do you know what we do with absurdism? Did you eat the children because you read in the book once that poor people should just eat their children if they were hungry and you were out of work and had nothing but beans in the cupboards?

Man, I really didn’t want to write a defense of satire this morning, especially one so obvious, but Get Back doesn’t deserve the bad rap it’s getting from the music publication of record. It really is an enjoyable and well executed romp through rock history inspired by Stephen McBean’s recent move from the land of ice and funny looking money up north to the city of the stars. McBean and players hit on krautrock (“Ambulance City”), Springsteen-style rock populism (“Sixteen”), the apocalyptic psychedelic rock of the late ’60s (“Second Summer of Love”) and ’80s UK new wave (the tracks “Shakedown” and “Wheels” recall The Psychedelic Furs and Echo and the Bunnymen, respectively).