Warning: "continue" targeting switch is equivalent to "break". Did you mean to use "continue 2"? in /nfs/c06/h01/mnt/88637/domains/blog.irockcleveland.com/html/wp-includes/pomo/plural-forms.php on line 210
 I Rock Cleveland I Rock Cleveland | The Rockometer: Sunbathing Animal by Parquet Courts 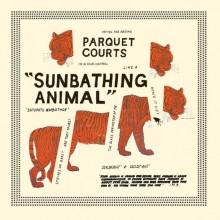 Mocking is easy, even natural, when a band rises from the Brooklyn underground and quickly gets labeled Rock’s next great hope. It doesn’t matter than Parquet Courts never asked to be the new Strokes. It’s out there and now the band and music fans both have to deal with those high expectations.

Neither is the case of Parquet Courts helped by the fact they’re ones to proudly wear their indie rock and punk rock influences on their sleeves. Listening to their new album, Sunbathing animal, one can quickly identify both the minimal art-punk of The Modern Lovers and the winking, self-awareness of Pavement.

It’s as if a focus group was convened to craft the perfect album for men with beards (and the women who love them) who wear plaid and bike to brunch on Sundays on their fixed gears. For fuck’s sake, there’s even a track where a woman takes notes in a Moleskine journal. Parquet Courts are NERDS!!! HIPSTER NERDS!!!

And yet, Sunbathing Animal has charm, a whole lotta charm, enough to charm the fancy pants off of the most smarty-pants hipster. Songs like “Black and White” can be vaguely detached and vaguely danceable at once. Even at his most agitated, as he is here, vocalist Andrew Savage exudes a strange sense of control, as if worked up is his calmed down is his worked up. Guitars clash and guitars clang in intentional fits of dissonance. It’s up to the nimble rhythm section of Max Savage (drums) and Sean Yeaton (bass) to keep things tidy. If you’ve ever listened to Pavement, The Pixies, The Modern Lovers, The Strokes, The Velvet Underground, hell, any indie rock guitar band who’s ever been labeled cool in the past 40 years, this one is for you.

If the influences are obvious, it’s because the four members of Parquet Courts are true students of the genre, and they fully understand how change happens in rock. It’s not spontaneous. If you think the Beatles or Nirvana exploded outta nowhere, it’s only because you never knew where to look for their roots. Change in rock music happens incrementally as new bands take pieces and parts from the acts they admire. Where Parquet Courts succeed is in transforming their accumulated knowledge into something distinct, and yes, charming. That guitar melody on the breezy, seven-minute “Instant Disassembly” is an intentional homage to Dire Straits’ “So Far Away,” and they ride that riff for all its worth. After seven minutes its apt to get wedged in your head for seven minutes more.

Everything Parquet Courts do on Sunbathing Animal is similarly effortless. Whether we’re talking about a garage rock rave up like the title track, or a beaten down with beat up instruments ballad, like “Broken Down;” whether it’s the sputtering, then rocketing “Duckin’ and Dodging” or the robot rock of “What Color is Blood,” this quartet doesn’t sweat. Knowledge is one thing, but this is also band who has the chops to back up all of their shop talk.

Being the latest and greatest from Brooklyn, Parquet Courts have a target painted on their back. Don’t kid yourself. I mocked, I kidded. Others will fight their nerdiness with more nerdsome blabber about how every band tipped to be the next best thing is too white, too Brooklyn, too privileged, too male, too whatever. Success can bring out the worst in all of us, especially those paid by word to write music think pieces. Just know this, if you’re even the slightest bit interested in ’70s punk or ’90s indie rock, you’ll be wearing this record out for the rest of the summer. That is no bullshit.