Warning: "continue" targeting switch is equivalent to "break". Did you mean to use "continue 2"? in /nfs/c06/h01/mnt/88637/domains/blog.irockcleveland.com/html/wp-includes/pomo/plural-forms.php on line 210
 I Rock Cleveland I Rock Cleveland | The Rockometer: Deep Fantasy by White Lung 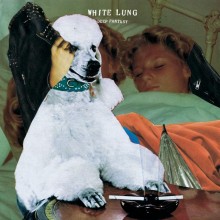 In the year 2014, women who rock should not be an oddity. Yet, 20 years past the Riot Girl movement, and even longer since Joan Jett and the Runaways paved the way for bands like L7, Hole, Bikini Kill, 7 Year Bitch, and Sleater-Kinney, we’re back to the point where the price of admission to rock is a pair of balls.

Now, technically speaking, the members of Vancouver’s White Lung do have one set of balls among them, Kenneth William is credited on both bass and guitar on Deep Fantasy, but the focus of the band is rightly placed on lead scream Mish Way. After all, it’s Way’s confrontational, no bullshit lyrics and her husky howling that is White Lung’s main source of power.

Pre-tabloid Courtney Love would be an apt comparison for White Lung. Early L7 would probably work, too. For while the band rips through these 10 tracks in little more than 22 minutes, there’s an undeniable sense that they have a “Miss World” or “Pretend That We’re Dead” single in them should they ever decide to slow down.

At this point in their career, however, White Lung have no intention of slowing down. The tempos are all set to an unforgiving, circle pit speed, and William’s guitar work is equally informed by both punk and metal. The man can chug and gruff for bars on end, and then rip a flashy, technical riff like nobody’s business.

That mix of pummel and flare which served so many Pacific Northwest bands so well all those years back is no less thrilling today. Way’s in your face feminism is equally refreshing. Why our culture needs a collective sledgehammer to the noggin to remind us of those facts is a question for the thinkers and their think pieces. Blast this one first, and ask questions later.