Warning: "continue" targeting switch is equivalent to "break". Did you mean to use "continue 2"? in /nfs/c06/h01/mnt/88637/domains/blog.irockcleveland.com/html/wp-includes/pomo/plural-forms.php on line 210
 I Rock Cleveland I Rock Cleveland | The Rockometer: Noise by Boris

The Rockometer: Noise by Boris 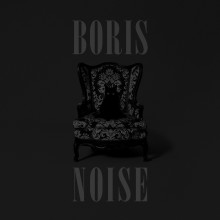 Depending on who you ask, the last essential album by Japanese noisemakers, Boris, was either 2005’s Pink or 2008’s Smile. Honestly, one could pick any one of Boris’ multitude of releases between ’05 and ’08 and come away a fan for life. Few bands have been able to effectively mix such varying strains of rock music like the blues, metal, drone, doom, dream pop, shoegaze, sludge, scuzz and noise as expertly as they have during the course of their lengthy career.

Even the most ardent Boris supporters would have a hard time picking out an essential album from the band’s latter day output. Some time around their Heavy Rock Hits 7″ series in 2009, the band became infatuated with technology. Their music lost its visceral edge in a maze of laptops and wires.

There are times on the trio’s latest release, simply titled Noise, that it seems the band have righted the ship. “Quicksilver,” in particular, is a nine-minute shred-fest filled with unpredictable fits and ecstatic riffs. “Vanilla” provides similar thrills in roughly half the run time.

The remainder of the album is strangely paced and oddly recorded. Massive guitar lines are buried deep in the mix. Powerful, floor-shaking drones, once a hallmark of the act, are also relegated to the fringes. Tracks run too long and without any direction. This is a band in desperate need of a rock svengali in the vein of Rick Rubin or Steve Albini to get them back to what they do best. Hell, should either man hear the flaccid, 18-minute “Angel,” they may even take on Boris as a charity case.