Warning: "continue" targeting switch is equivalent to "break". Did you mean to use "continue 2"? in /nfs/c06/h01/mnt/88637/domains/blog.irockcleveland.com/html/wp-includes/pomo/plural-forms.php on line 210
 I Rock Cleveland I Rock Cleveland | The Rockometer: Typical System by Total Control 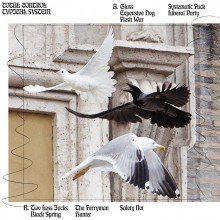 Considering Mikey Young’s prominence in the Australian underground, it should come as no surprise that it took him and his band, Total Control, two years to record the follow-up to their 2011 debut, Total Control. One can think of Young as Melbourne’s answer to Dan Auerbach of the Black Keys, but without the glossy profiles, gold on the ceiling and money in the bank. The one-time Eddy Current Suppression Ring guitarist pops up on numerous Aussie rock releases every year as either a recording engineer, producer or a performer. His name can be found in the credits on albums by UV Race, Dick Diver, Lower Plenty, and Royal Headache.

The fully-realized sound of Total Control’s sophomore record, Typical System, shouldn’t be a surprise, either. Even when Eddy Current Suppression Ring were at their ragtag best, the band had this way of repurposing the well worn styles of garage rock, punk rock, and post-punk into their own unique clatter. I seem to remember writing some years ago something to the effect, “Eddy Current Suppression Ring play post-punk as if it preceded punk rock.” The recklessness on the surface of those records belied an informed, calculated approach to low budget rock.

Similarly, here on Typical System, Total Control take their cues from early electronic music, new wave and ’80s UK rock, but never settle for mere replication. The vintage synths and drum machines on album opener, “Glass,” are reminiscent of the early synth-pop performers who were seemingly overjoyed at getting a basic buzz and clap-track to tape.

By no means is “Glass,” a road map, however. The robotic, scuzz punk of “Expensive Dog,” displays a density unheard of when post-punk and new wave went their divergent ways in the early ’80s.

On “Flesh War,” the band find the midpoint with the darker undertones of Echo and the Bunnymen and Psychedelic Furs given a cold, inhuman treatment.

With “2 Jacks” and “Black Spring” Total Control fully utilize all their expertise on stage and in studio to create something like electronic punk, or digital hardcore, but without a torturing excess of screech. Instead, this is a detailed aggression where horns and electronics pair with the more common rock instruments in a choreographed fight for the future of high-speed noise. Depeche Mode never made a righteous mess quite like this. Come to think of it, few modern artists are able to combine precision electronics with old-school, punk rock passion, either. On Typical System, Total Control have done the unthinkable and given robot rock a soul.