Warning: "continue" targeting switch is equivalent to "break". Did you mean to use "continue 2"? in /nfs/c06/h01/mnt/88637/domains/blog.irockcleveland.com/html/wp-includes/pomo/plural-forms.php on line 210
 I Rock Cleveland I Rock Cleveland | The Rockometer: Champagne Holocaust by The Fat White Family

The Rockometer: Champagne Holocaust by The Fat White Family 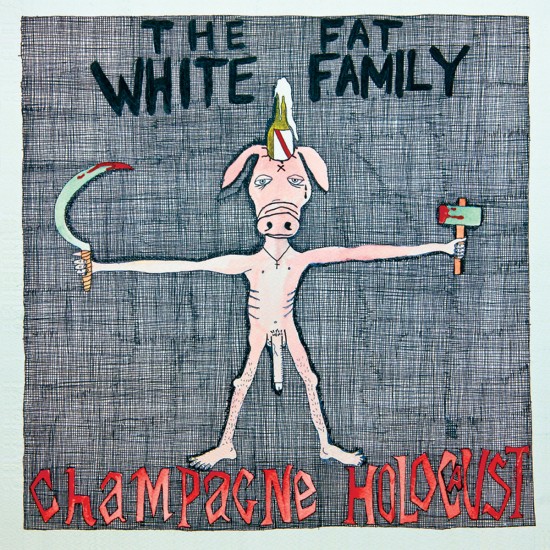 With a band like The Fat White Family, where does one even begin?

There’s this listicle from GQ’s UK edition in which we learn the band have a habit of losing their pants and letting their wangs hang during live sets, they have been banned from a venue where they were scheduled to support Franz Ferdinand, they hung a banner proclaiming, “The Bitch is Dead,” in their Brixton neighborhood to celebrate the passing of Maggie Thatcher, and brothers Lias and Nathan Saoudi have been labeled outcasts by some of their Muslim family members. Oh, and they also like to talk shit about other UK acts like Kassabian and Arctic Monkeys and never apologize for calling shite, shite.

Or, there’s this, for those who prefer visual learning: a full live set of the band was recorded during this past Spring’s SXSW. It was a pants optional show.

I could give you a word soup of nouns and adjectives, like “sick, twisted, dong-dangling agitators who are too smart for their own good and act without a shred of decency.”

Their playful, some would say devious, attitude extends beyond the lyrics. They have no problem fucking with generations of rock grooves, and do it quite well, thank you. “Without Consent” doubles as a Radiohead mumble groove and a free jazz inspired freak-out. Had it been written by Misters Yorke and Greenwood, critics would be hailing it as a return to the form of Kid A. Later, “Cream of the Young,” with its mix of moody electronics and spaghetti Western melodies stakes similar territory as Alabama 3’s Sopranos’ theme.

For the meat of the record, on the slop rock of tracks like, “Special Ape,” “Wild American Prairie” and “Heaven and Earth,” the Fat Whites clash and clang with the purpose of creative dissonance, not indifference, branding their own version of Americana-influenced, garage rock.

Even the chaw-spittin’ ballad, “Borderline,” is deceptively dense with a drone track, a couple out of tune guitar tracks, whoops and kazoos all adding to its rickety melody.

When lead singer Lias Saoud brings out his best twang for, “If My mind was clean/I’d be fine/But I’m borderline,” it also contains the lines which may be the key to unlocking the entire Fat White phenomena A band with fine minds would certainly make a fine rock record. By blurring the lines between high-minded art and low-brow tomfoolery, the deranged, juvenile, totally fucking mad minds of The Fat White Family have made a modern classic.