Warning: "continue" targeting switch is equivalent to "break". Did you mean to use "continue 2"? in /nfs/c06/h01/mnt/88637/domains/blog.irockcleveland.com/html/wp-includes/pomo/plural-forms.php on line 210
 I Rock Cleveland I Rock Cleveland | The Rockometer: Frozen Letter by Spider Bags 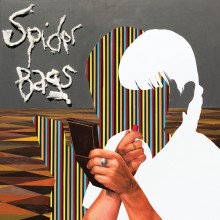 Spider Bags summed up in two song titles: “Papa Was a Shithead” from their 2013 singles collection and “Waking Up Drunk” from their 2007 debut.

Spider Bags summed up in two lyrics: “In the town I live/The Lord is risen/There aren’t any jobs/Unless you’re working at the prison” from “Walking Bubble” on their latest album, Frozen Letter, and “Been livin’ in the same town my whole life/Cheatin’ on my girlfriend with my ex-wife” from “Keys to the City and 2012’s Shake My Head.

You see, like the Supersuckers before them, this Chapel Hill trio of twangy punks revel in the peculiarities of southern life — The trailer parks and the Wal-Marts, and the trailer parks located next door to the Wal-Mart; bad relationships and bad life decisions in general; Jesus and booze and Rock ‘N’ Roll and the healing powers each hold.

In the world of Spider Bags, hearts are made to be broken, conspiracy theories double for the truth and your own tenuous hold on sanity hinges on your ability to laugh at the absurdity of it all. A good guitar riff don’t hurt, either. Lead track, “Back With You Again in the World,” doubles down on the leads, doubles down on the solos, and doubles down on the echo, producing a ricochet effect as competing melodies bounce between the speakers. Oh, and pay no attention to the banter caught at the end of the tape. I’ve heard better solos, too, but the ease with which they brewed this psychedelic, Southern-fried stew is impressive in its own right.

Within this context, of the only kind of luck being bad luck, a good, old-fashioned rave-up, like “Japanese Vacation,” serves a real purpose. Shit gets heavy on the back end of Frozen Letter. “Coffin Car,” is one winding, tears in your beer ballad and “Walking Bubble,” goes bluegrass for its worry. Later, Spider Bags show even more versatility as they do deep, weed-lovin’ longhair blues, on “We Got Problems.”

In a lesser band’s hands, that second side would be a bummer. The shortest run time on the flip side is five-oh-nine. And technically, if we’re talking subject matter, that second side is a total bummer, but, with the bluegrass and the dueling leads wrecked with echo and Spider Bag’s capacity to bind that book of bad days with an almost care-free pride, they make daily life in the weirdo south sound like Shangri-fucking-la.