Warning: "continue" targeting switch is equivalent to "break". Did you mean to use "continue 2"? in /nfs/c06/h01/mnt/88637/domains/blog.irockcleveland.com/html/wp-includes/pomo/plural-forms.php on line 210
 I Rock Cleveland I Rock Cleveland | Play Me: “Words” by Goat

Play Me: “Words” by Goat 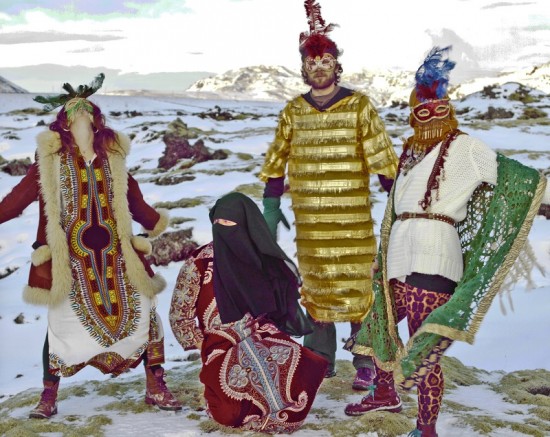 Sweden’s Goat may or may not be descended from some weirdo hippie commune tribe in the Swedish Arctic, and they may or may not be playing the music of their fathers and their father’s fathers. What isn’t in doubt, however, is their ability to create an always invigorating mix of head music from disparate traditions of psychedelic rock. Think about it. If even half of the back story is true, let’s say the part about being from the Arctic, then the mysterious Goat were blessed with a most bad-ass record collection, spanning everything from the afrobeat of Fela Kuti and the driving motorik of Kraftwerk to the harrowing, apocalyptic acid rock of Jefferson Airplane. With throbbing electronics, an intense, bass and tom heavy drum beat, and vocals evoking Jefferson Airplane’s Grace Slick at her druggiest, “Words,” covers three continents and two decades in just about three minutes. The fact that one can appreciate it without a tour guide, musical, spiritual or otherwise, is proof, again,  why Goat should be at the top of your shopping list when the new album, Commune, drops 9.23 on Sub Pop.