Warning: "continue" targeting switch is equivalent to "break". Did you mean to use "continue 2"? in /nfs/c06/h01/mnt/88637/domains/blog.irockcleveland.com/html/wp-includes/pomo/plural-forms.php on line 210
 I Rock Cleveland I Rock Cleveland | The Rockometer: Primitive and Deadly by Earth 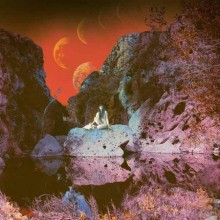 Since Earth’s resurrection in 2005, the Seattle doom and drone pioneers led by guitarist Dylan Carson have etched out a respected career out of one very long, and very deliberate note. Their brand of drone, or apocalyptic folk, established on 2005’s Hex; Or Printing in the Infernal Method, and later perfected on 2008’s The Bees Made Honey in the Lion’s Skull and the two volume Angels of Darkness, Demons of Light is big on dystopian images of burned out, barren landscapes, perfectly suited for a culture where some sects believe a literal hell is around the corner while others believe in an imminent zombie apocalypse. More impressively, Earth have crafted these expert scenes on sound alone, leaving the listener and their mind the task of filling in the how and when civilization met its bitter end.

Earth’s latest release, Primitive and Deadly, marks a considerable change of course. The collected tracks are still wildly evocative landscapes of places you’d rather not be, but For the first time since the band’s initial run in the ’90s, when Kurt Cobain lent his voice to “Divine and Bright”, Earth have brought vocalists aboard. Long-time Seattle scene-mate Mark Lanegan, sings on to two tracks. While newcomer, Rabia Shaheen Qazi of Seattle’s Rose Windows, handles the duties on another.

Both Lanegan and Qazi treat this new gig with the graveness it deserves, willing to defer to Carlson and mimic his guitar leads. Lanegan, especially, with that old Marlboro Reds and Gentleman Jack Daniels voice of his, embraces the instrumental nature of Earth with a stream-of-consciousness style delivery tailored to Carlson’s side-winding solos during “There is a Serpent Coming.”

While Qazi’s performance is arguably bigger and bolder than Lanegan’s turn, she, too, knows when it’s time to defer. Her incantations slowly caress Carlson’s deliberate melodies, on ‘From the Zodiacal Light,” retreating where one would expect the chorus in order to allow the focus to return back to Carlson’s intensifying pulsations.

The biggest surprise, however, comes later on “Even Hell Has Its Heroes.” Known for control and composure, and perfection in tone, Carlson allows himself to shred, in the traditional heavy metal way, with Built to Spill’s Brett Netson.

With its stylistic shifts, Primitive and Deadly almost feels like a missing Earth album that would have landed between the blank period of the band’s discography between ’96 and ’05. There’s also a sense here of Carlson testing the different directions he could take Earth in the future. The band could do loud again. The band could do a more traditional rock album. When you’ve played the game as long as Carlson, you get the right to experiment with your listeners is an implied one.