Warning: "continue" targeting switch is equivalent to "break". Did you mean to use "continue 2"? in /nfs/c06/h01/mnt/88637/domains/blog.irockcleveland.com/html/wp-includes/pomo/plural-forms.php on line 210
 I Rock Cleveland I Rock Cleveland | The Rockometer: Black Moon Spell by King Tuff 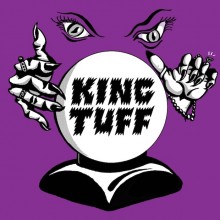 Would Batman still be Batman without Bruce Wayne? Would Superman be the same without Clark Kent? Sure, they’d still be super heroes, of course, they’re super and heroic, but without their alter egos their characters would be far less compelling.

For two albums, King Tuff’s Kyle Thomas pulled off a similar stunt. By day he was a do-nothing layabout who surfed couches and snacked cheese doodles. In his dreams, and on stage, he was a different person. The minute he strapped on that guitar he would become King Tuff, the pin-up idol of teenage girls and the envy of every man who’d ever played to mostly empty, wholly disinterested barrooms.

Thomas/King Tuff had humility. Thomas/King Tuff was funny. One song he’d be a modern day Marc Bolan, leading the boogie brigade as he rode a fucking tiger. The next track, he was getting slapped by the very same women who joined his groove parade.

For some, the title track will be all they need to hear. Just read this first verse: “I feel a sickness in your heart/’Cause you drank my witch’s brew/You were too right from the start/You knew I felt it, too/Got a black moon spell on you.” Those words would have been silly in the ’70s when every heavy band was penning stupid shit. They’re even more painful to parse in 2014. I’m not sure face paint, platform shoes, and a fire shooting guitar would even help here.

And it’s not just the opening track that suffers from a lack of humor. Get a load of some of these other titles: “Rainbow’s Run,” “Magic Mirror,” “Demon From Hell,” “Black Holes in Stereo,” and “Staircase of Diamonds.” Unless your wardrobe consists of dress Iron Maiden t-shirts for work and a worn-in Iron Maiden t-shirts for the weekends, you’re gonna have trouble getting through this album.

Thankfully, the music itself isn’t as frustratingly mindless as its subject matter. Thomas brings back some of that Marc Bolan boogie rock on “Madness” and “Eddie’s Song,” where the rhythms are stomped out and the lead guitar consists of isolated blasts of defiance against a bottom-moving bass. “Headbanger” even has wit. Listen closely and after shout outs to Maiden, Sabbath, and Judas Priest, you’ll hear Thomas use a Slayer album title as a euphemism for oral sex.

Look, I get it. Classic metal is still remembered fondly by many rockers. However, an album long love letter which embraces the worst impulses of the period, like hammy lyrics and pompous solos, without acknowledging the inherent ridiculousness of having one’s soul saved by the devil an Rock ‘N’ Roll is maybe not the best way to show that affection. The best bands of that period understood they were like comic book heroes to the kids. On Black Moon Spell, it’s impossible to tell if there’s any part of Kyle Thomas left in King Tuff. More songs about using Slayer for oral sex and fewer about casting spells, would have helped. Hell, any personality would have helped. Where is Kyle Thomas, anyway? He’s never around when you need him…