Warning: "continue" targeting switch is equivalent to "break". Did you mean to use "continue 2"? in /nfs/c06/h01/mnt/88637/domains/blog.irockcleveland.com/html/wp-includes/pomo/plural-forms.php on line 210
 I Rock Cleveland I Rock Cleveland | The Rockometer: Life/Thrills by Lower Plenty 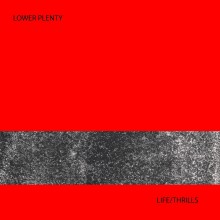 I’ve been writing about music long enough to know some prime bullshit when I read it. Not every band is going to change your life. Not every band hyped on Stereogum, Pitchfork, or Spin is going to be the next Raiohead or whatever it is the kids listen to these days. Shit, most outlets can’t be bothered to even listen to songs any more. It’s all read press release, post and repeat until the daily quota is filled.

Yet, every once in a while, when my guard is down, I come across a band and the person that said it the first, said it the best. Take this bit about the Melbourne band, Lower Plenty, penned by the band’s Australian label, Bedroom Suck Records:

Named after a Melbourne suburb, Lower Plenty are comprised of some of the city’s most talented musicians. The quartet of Daniel Twomey (percussion), Jensen Tjhung (guitar + vocal), Sarah Heyward (percussion + vocal) and Al Montfort (guitar + vocal) hail from various other bands such as Deaf Wish, Total Control, UV Race and The Focus. A departure from the harsher sounds of their other projects, Lower Plenty create beautifully melancholy, suburban-country music that’s made (and often performed) while sitting around the kitchen table

That bit about friends from other bands in town gathering around a kitchen table to write and record music describes Lower Plenty to a tee. The ten, largely acoustic numbers collected on Life/Thrills are spontaneous and endearingly unpolished: The percussion often sounds like washboards or bottles and cans; the guitars are loosely strummed and tuned to good enough; and, the lyrics are often conversational in nature, gathered from bits overheard about town or supplied as the answer to the simple question, “What did you do today?”

Or, “Do you remember when?”

There is a second side to Lower Plenty. Remember that bit about the four members also playing in Deaf Wish, Total Control, UV Race and The Focus. Well, Total Control and Deaf Wish have both had singles released on one of America’s big indies in Sub Pop Records. These aren’t just four friends sharing drinks and sharing songs, but four talented musicians sharing, sharing songs, and improvising. “Concrete Floor” features a secondary guitar (or is it sitar?) melody that sounds like a ceiling fan. Maybe it was the ceiling fan. Gongs ring and random times, further adding to its disoriented state. At its apex, the tempo quickens to an unsustainable pace and the listener can be stone cold sober and fall down drunk at the same time.

“You Pushed Me,” is even more out there. The tuned-good-enough guitars can’t seem to get close to the same chord as the droning white noise in the background. Snare hits pitter and patter like a feral cat who’s been spotted out in the yard, and the cymbals are played with all the care of a child dragging a stick along a chain-link fence. It’s as if folk music is some hitherto unexplored realm, rife with possibilities. Conversely, one can think of Lower Plenty as one of the rare bands who do folk right: as a communal event, free of expectations and full of food, drink and stories to share.